At one of the highest attended Face to Face interviews, ITV presenter Mary Nightingale had a refreshingly open and frank conversation with the chief executive of Sodexo UK & Ireland, Aidan Connolly. 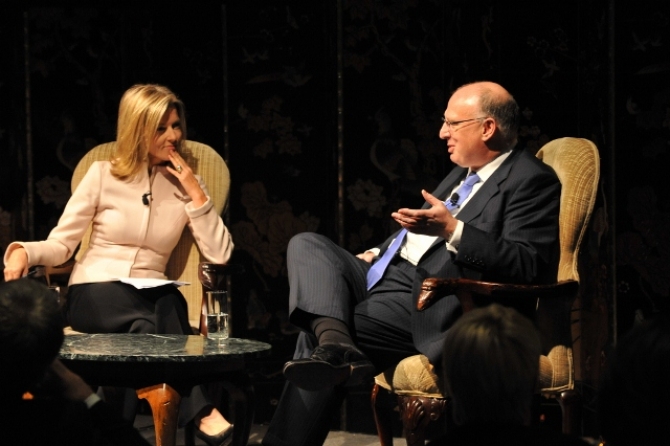 Taking the reins from the usual interviewer – her colleague, Alastair Stewart – Mary gave the audience a fresh approach to the Face to Face interview, provoking some very honest answers.  When asked what the secret to his success was, Aidan replied “Hard work and not being afraid to ask dumb questions.  I just try really hard not to screw up”.

Having become CEO last year, profits are up in double digits for the second year running and it’s the diversity of the role that excites Aidan.  Sodexo touches 6 million people every day with a ‘quality of life solution’ but it’s the company’s roots in catering that fascinates Connolly, “With catering, it’s ‘just in time’ – there is no plan B.  At 1pm on a given day, 342 customers will go to their staff restaurant and will need to be fed. Whatever happens, food must be served on to their plates.”

In addition to catering and hospitality, skills within the operation of the Sodexo business are as diverse as calming a prisoner in the Kalyx business, through to controlling the temperature of an operating theatre. He puts its success down to the operational team:  “I don’t do the work.  They pay me to take the blame if things go wrong.  That’s why it’s so important to have a skilled team that’s passionate about what they do.”

But, Aidan wouldn’t want to be seen as a “cuddly” employer – he’s there to make money and has the targets of a French PLC to meet. In the past eight years, Sodexo has expanded to a multi-national and Aidan has the legacy of providing top-end catering at the 2012 Olympics and the £12 billion Ministry of Defence project – the MOD’s second biggest priority after Afghanistan – on his shoulders.

Anybody would forgive him for being stressed, but he seemed pretty laid back, “I like the ability to change things.  Being able to fix things is what gets me up in the morning.”

On the economy, Connolly fears that the market will not come roaring back as fast as he or the industry at large would hope but believes that the provision of staff catering is crucial in running a sustainable business.  “To employ and keep a good workforce, you have to give staff benefits - catering is part and parcel of that package.”