The third in the series of exclusive Arena ‘An audience with’ events was headlined by Michel Roux Jr.  Attendees at the magnificent Langham, London, were treated to a fascinating ,honest and entertaining insight into the life, career, motivations and aspirations of this celebrated chef. 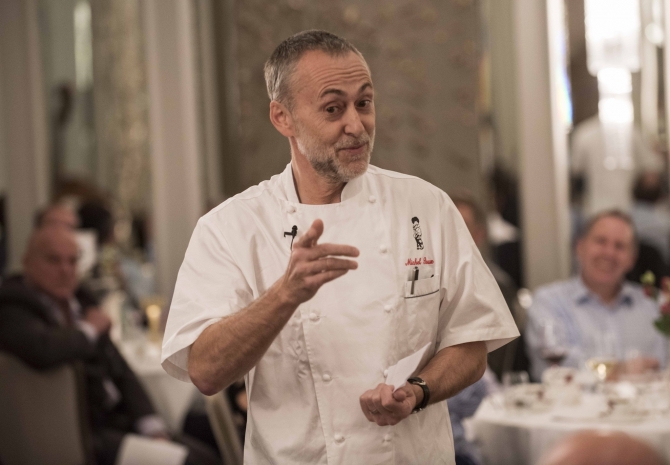 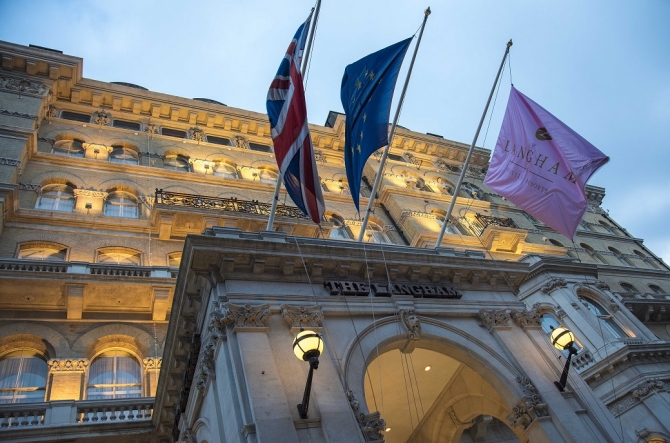 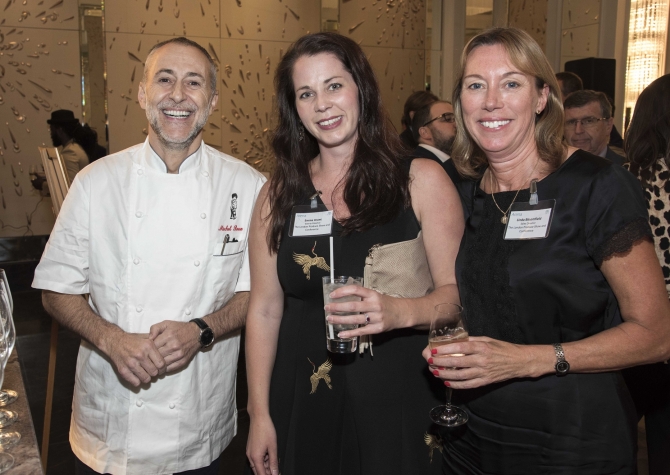 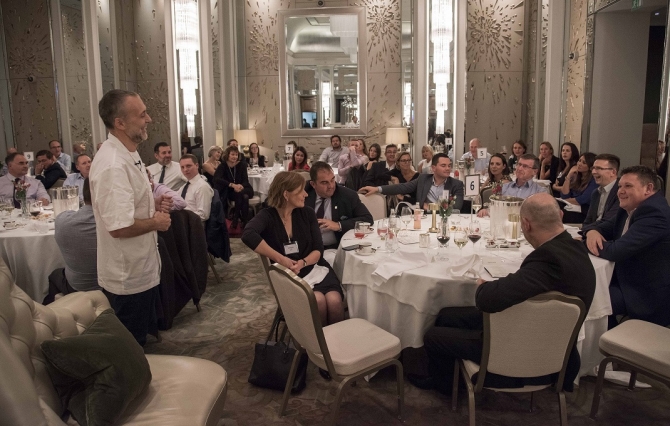 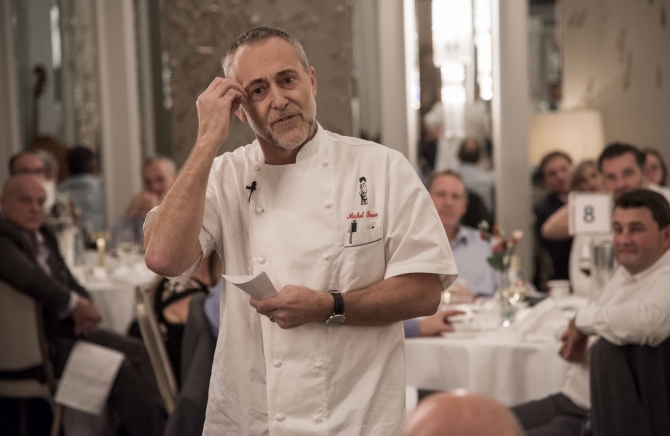 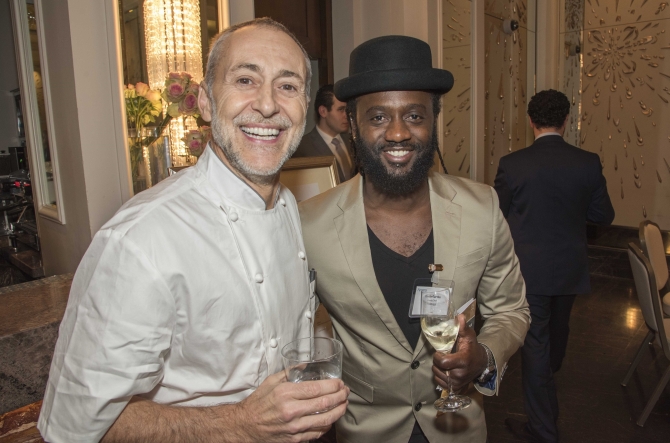 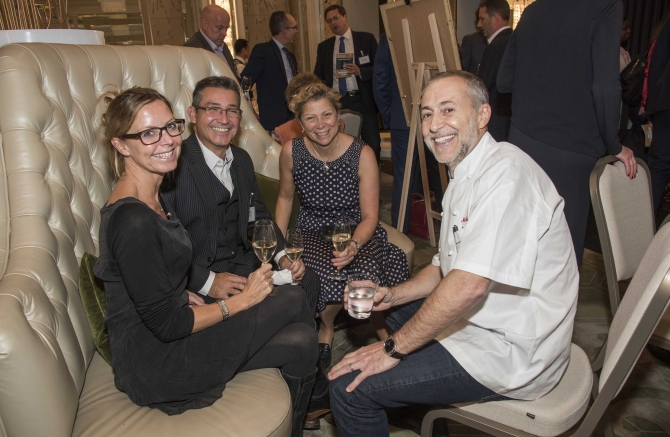 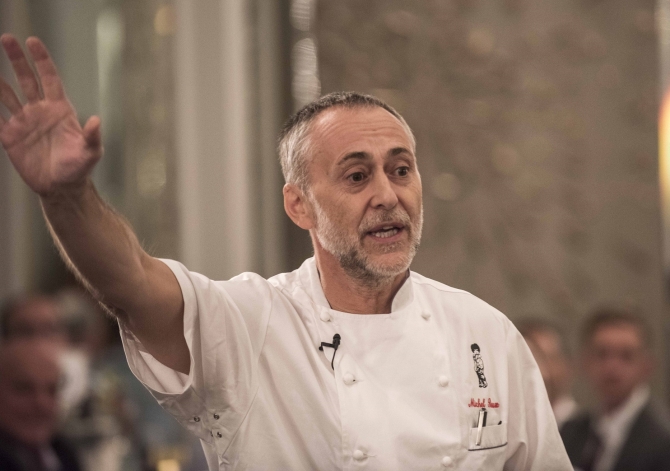 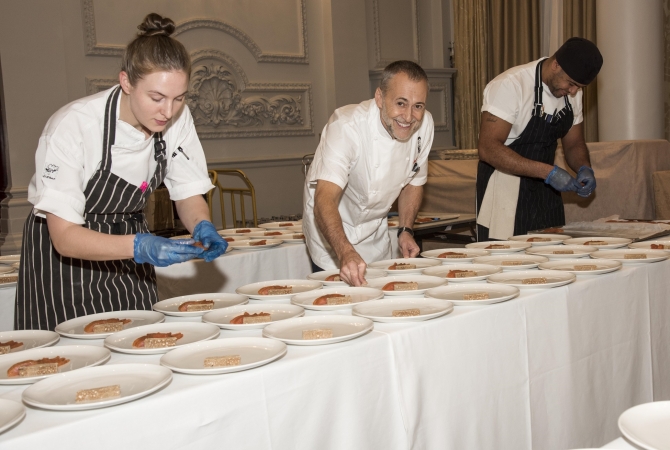 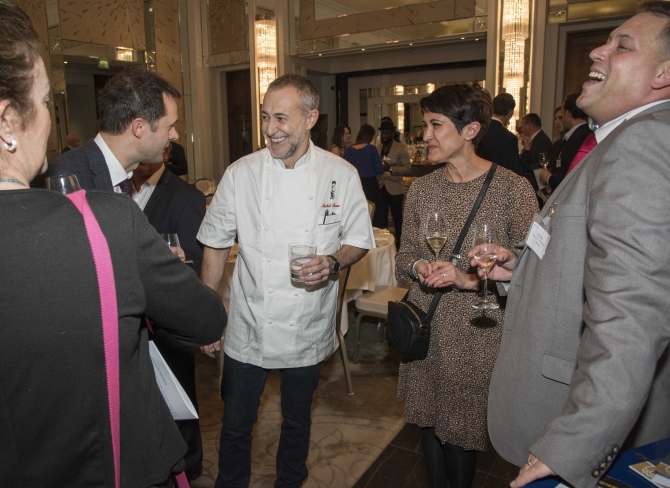 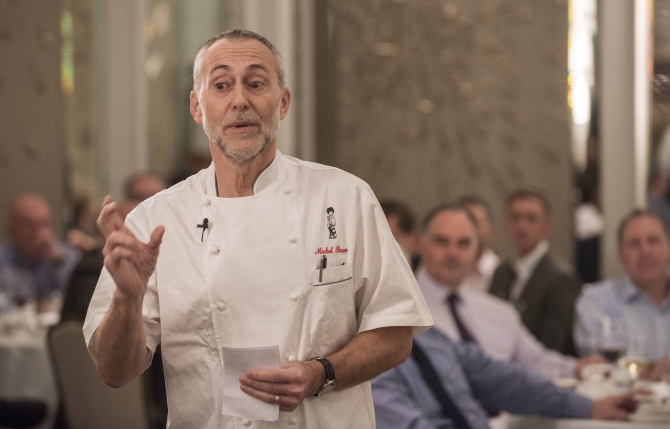 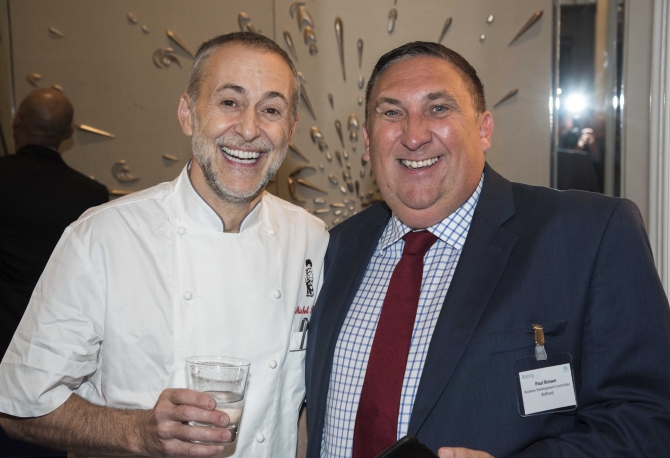 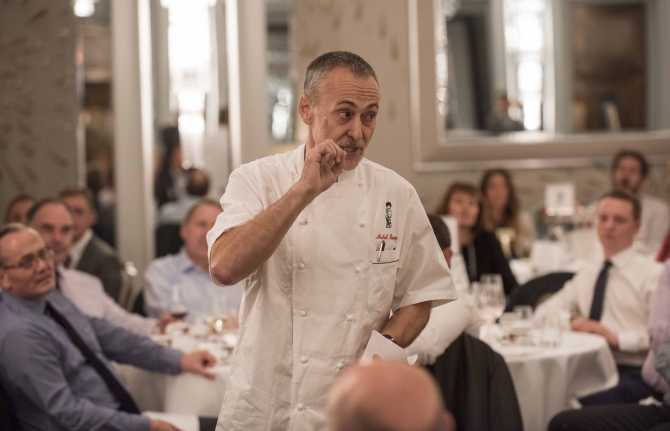 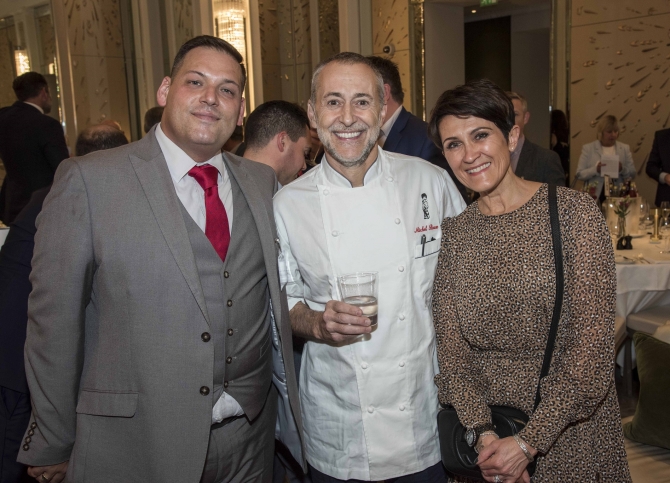 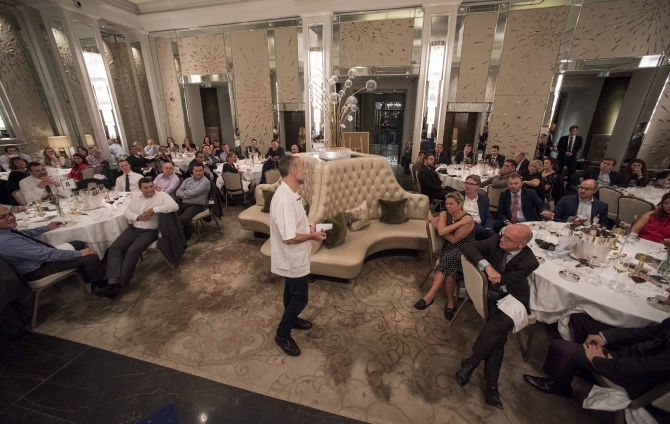 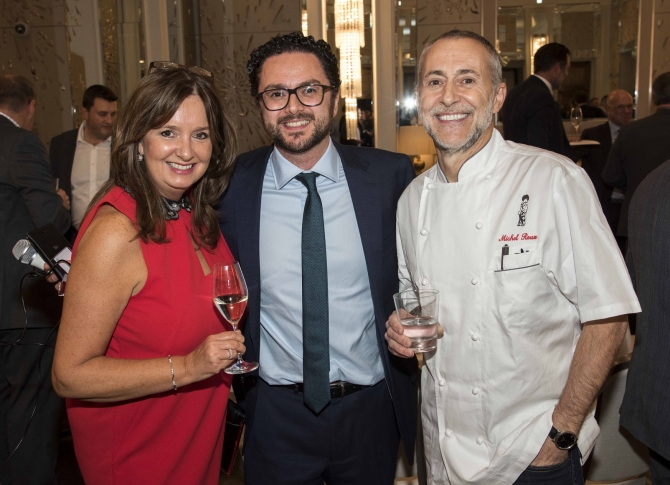 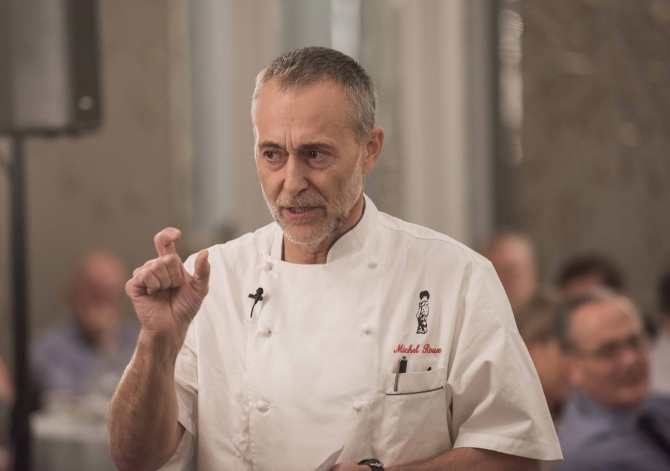 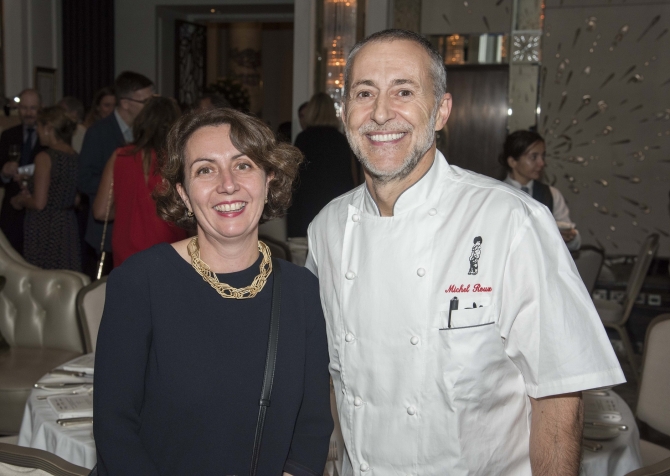 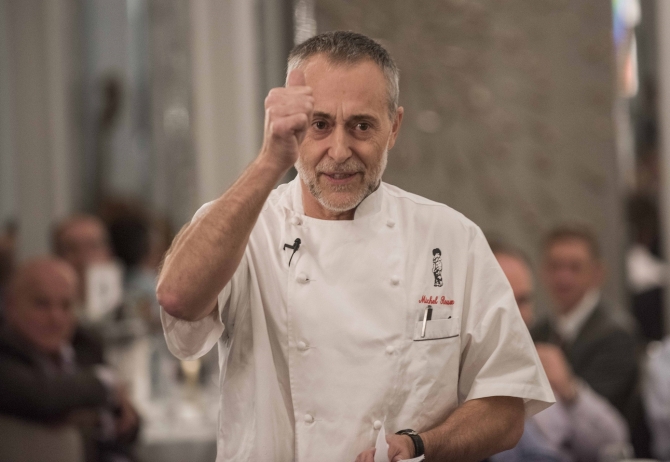 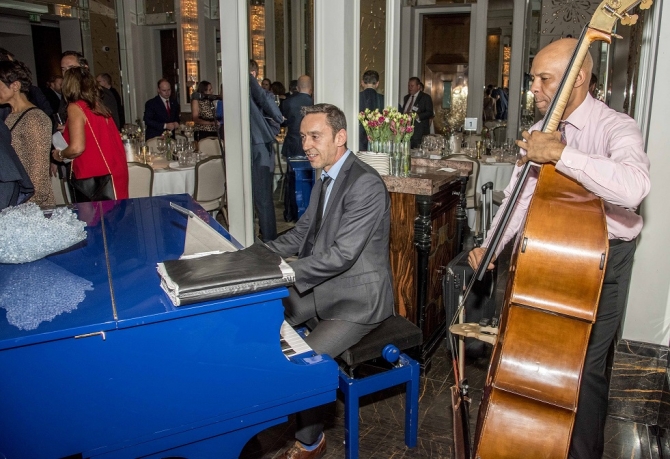 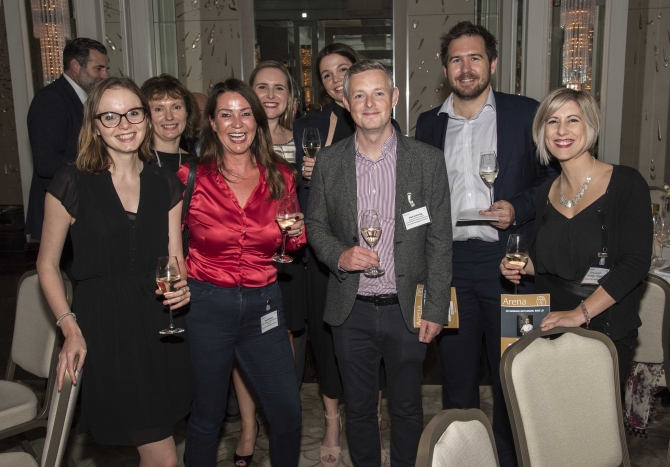 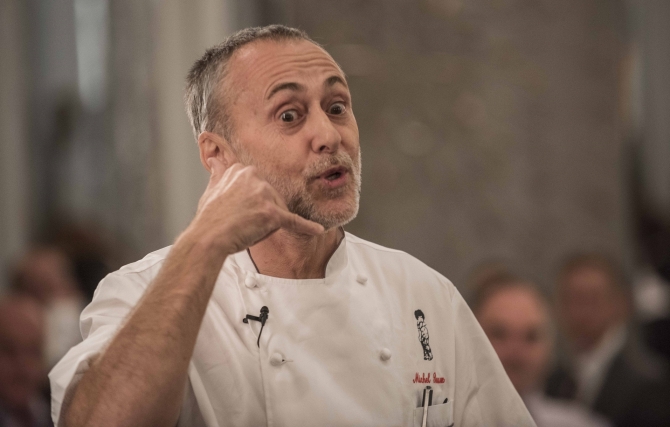 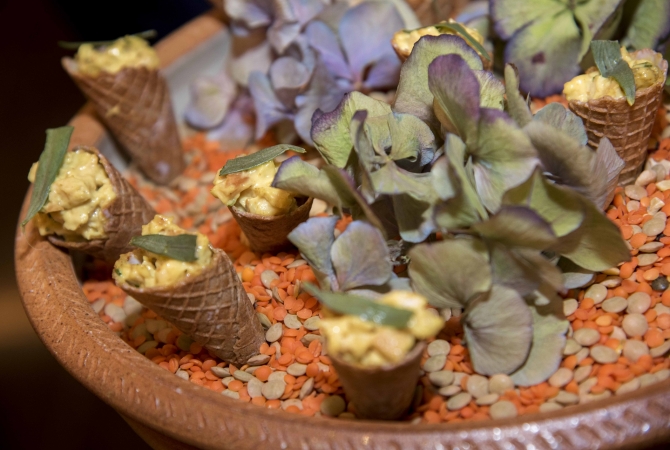 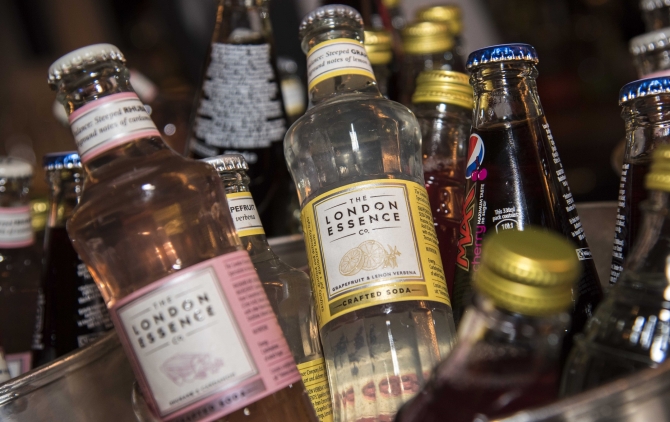 The third in the series of exclusive Arena ‘An audience with’ events took place at the stunning Langham, London. A venue that Michel Roux Jr described as, in his eyes, “the most prestigious, beautiful hotel in London”.

A real buzz emanated out of the Palm Court as foodservice and hospitality professionals caught up with colleagues and made new connections during the drinks reception. The festivity caught the ears and eyes of passing hotel guests, who even enquired how they could get an invite to the party!

After dinner, Michel Roux Jr entertained guests with his heartfelt, honest and often amusing tale of his chef journey – from a young boy with dual British and French nationality growing up in rural Kent to the highly successful, respected chef and restaurateur today and a member of one of the most esteemed chef families.

His fascinating outline of what’s made him a chef began in 1959 when his mum and dad first arrived in the UK. A time, which is now hard to imagine, when it was very difficult to get olive oil in this country and produce was not that great. His father, however, fell in love with the place and took a job working as a chef in a private home in Kent.

Born in 1960, Michel literally grew up in a kitchen. He spoke fondly of his first food memories, including fresh vanilla ice cream that he helped his father churn by hand, and his uncle’s fabulous sugar work. And, foraging, which is very de rigueur today, was simply a way of life.

In 1967, his father opened Le Gavroche with great success but the flip side for Michel was that he lost his father, who was working every hour possible and more. A commitment that Michel fully understands now.

In pre-common market Britain, Michel’s father was posed with the conundrum, ‘where could a restaurant that wanted to be the best get quality key ingredients?’ The answer lay with his mum and her clapped out Peugeot estate. Twice a week she would drive to the markets of Paris and load the car with produce. The audience laughed at Michel’s memories of how his mother tried to avoid suspicion at customs (which included taking the kids with her) and how she could sometimes charm her way through with British game, which was the envy of Europe, or Stilton cheese, which was revered as one of the best cheeses in the world (and still is by the French, although they won’t admit it!). As Michel reflected, he joked that in six months’ time his mum may have to come out of retirement!

As a young teenager, Michel broke the news that he wanted to follow in his father’s footsteps and be a chef. He went to Paris to do his pastry apprenticeship, a craft his father said would instill a certain rigour and discipline and was the best way to start his career. For two years, aged 16, Paris was his playground and he burnt the candle at both ends.

Michel worked under Henri Hellegouarch, who he described as a ‘leader of men’ and a boss that very rarely raised his voice. A leader that was the first in, last out with no job too small for him. His pet hate, however, was lateness, something Michel was guilty of a few times. Michel’s punishment came in the form of a large bag of almonds that he had to stay behind and painstakingly blanch and pop by hand, under Henri’s watchful eye. He finished the task and learnt a very important lesson. “To this day I have never been late.”

In the late 1970s, Michel did his French military service – something he believes, perhaps controversially, should be brought back because it’s an absolute leveler, regardless of a person’s background. It teaches respect for elders, respect for those in command and respect for the people around you, because you are all equal.

At the Élysée Palace, he worked for the incoming socialist President Mitterrand. The chefs’ concerns that the food served under the left-wing president would be poor were soon put to bed. It appeared that after 14 years out of power, the socialists had some making up to do. Michel described it as ‘party time’ with unbelievable opulence – including truffles once served as vegetables!

Michel also credits his time at the Élysée Palace as the beginning of his love of running and marathons, after having to respond to an unexpected call from the president wanting 24 oysters that they didn’t have. He ran to the nearest supplier ten minutes away, in just five!

Alain Chapel was a formative figure for Michel. The true restaurateur, ‘a host and a chef’, treated his staff well and led by example. He also took great care of the details from all perspectives, including the customers’, a fantastic quality Michel took on board and does to this day.

Michel’s rounded ‘chef upbringing’ also included working in a charcuterie and a butcher in Paris, time in Hong Kong, and he spent a year working under Pierre Koffmann, where he learnt the important skill of working with big numbers. In 1989, his father asked him to cover for his pastry chef at Le Gavroche. Michel was happy to help – and he never left!

Opening up the floor to the audience, Michel invited everyone to ask him any questions they wanted. Having alluded to up the ‘B’ word earlier, Brexit was a topic that had to be addressed. Not shy of giving his opinion, he described it as “a car crash that’s going to happen. Deal or no deal, it’s going to be painful.” He went on to urge the hardcore Brexiteers and hardcore Remainers to shut up and work together to make the best of the situation; it’s going to happen.

Other subjects brought to the table included inspiring the next generation; his national service food experiences (which included pate, dark chocolate and shots!); his takeaway of choice; least favourite job in the kitchen; food heroes; competition in the market; France vs England in football and rugby; and his dessert island dish of roast lobster with lashings of garlic butter. When asked for his favourite London restaurant, he championed supporting his local venues around Clapham, including The Bearing, Trinity and Chez Bruce, and when pushed for a name of the best chef in London, he diplomatically named his daughter, who has just opened a restaurant in Notting Hill with her husband.

So, what’s next for the chef with an incredible story? Apart from the book he’s launching in two weeks… Le Gavroche will continue to evolve and be relevant, as it has for over 30 years, by moving with the times but staying true to its roots. Will Michel still be working, as his father is, aged 83? Probably not, but he will absolutely still have an interest in the business and the industry.