On the evening of 20 March 2019, the Arena Savoy Lecture welcomed back Kate Nicholls, CEO of UKHospitality, to discuss Brexit and its impact on the industry. Just nine days before the UK was due to leave the EU, it was anticipated that the Brexit deal would be sorted and settled and focus would be on how the industry can prepare for the months ahead. But, with the drama still constantly unfolding in Westminster, this was not the case. An interactive panel discussion also welcomed Andrew Selley, CEO, Bidfood, Duncan Garrood, CEO, Ten Entertainment Group Plc and Peter Borg-Neal, Founder and Chief Executive Officer, Oakman Inns join Kate to explore Brexit and its impact further. 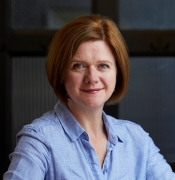 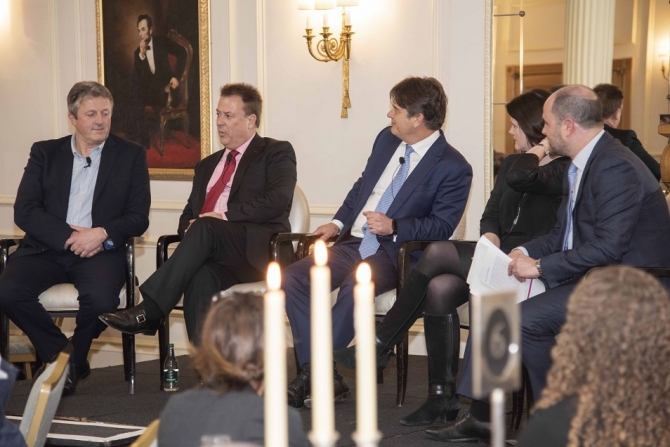 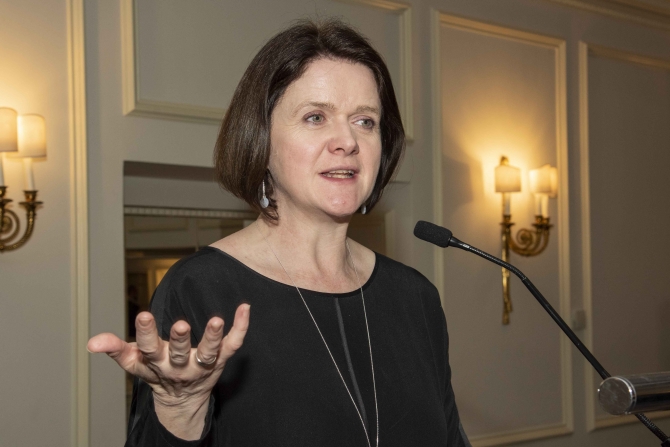 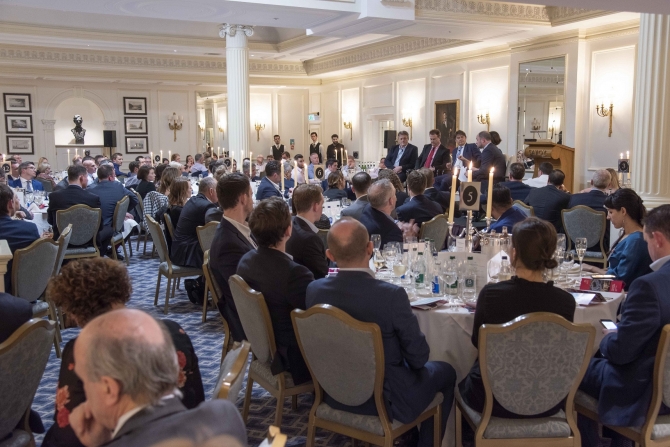 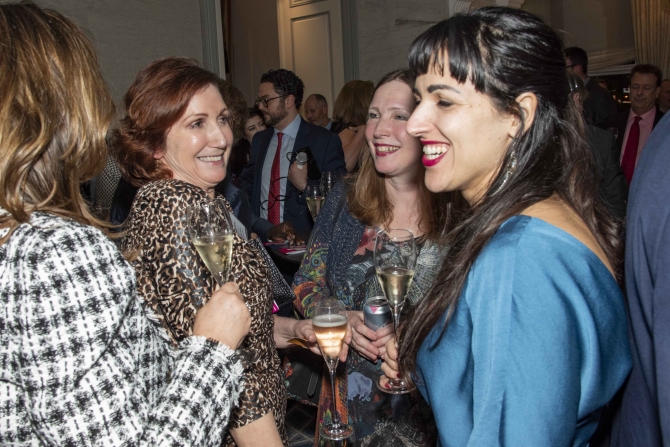 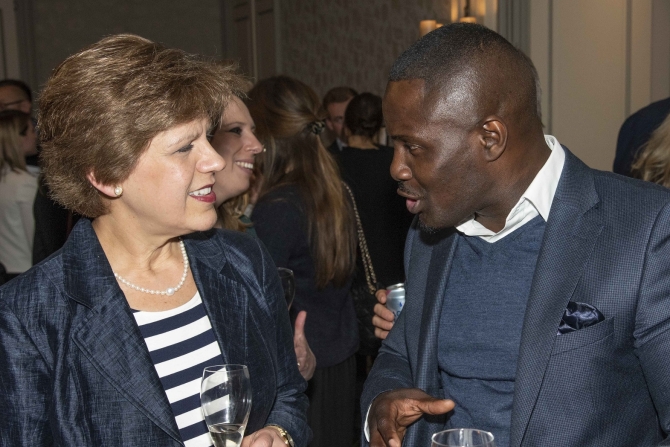 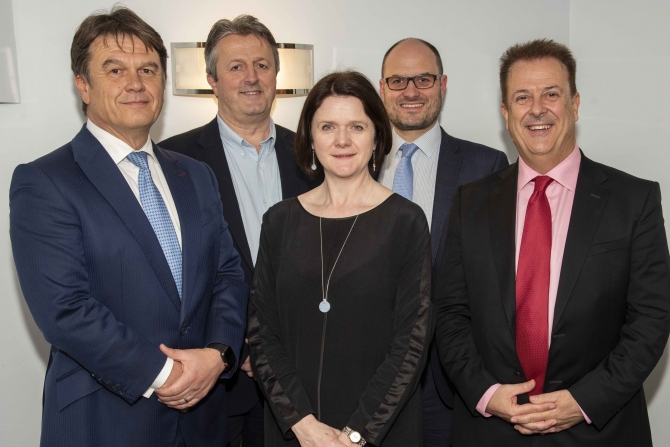 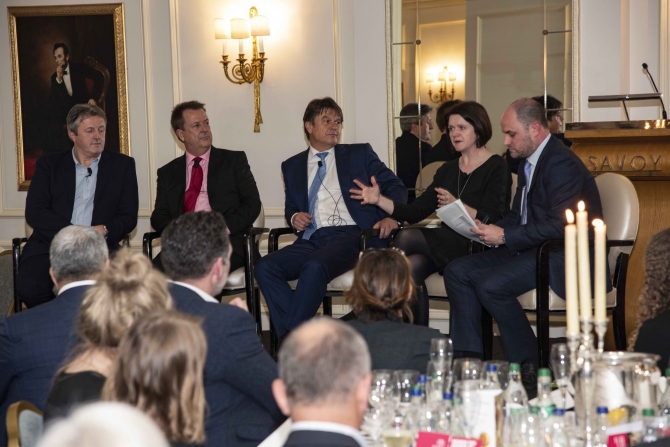 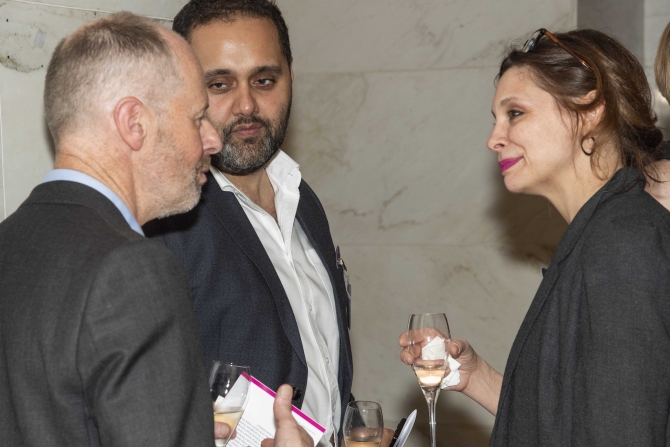 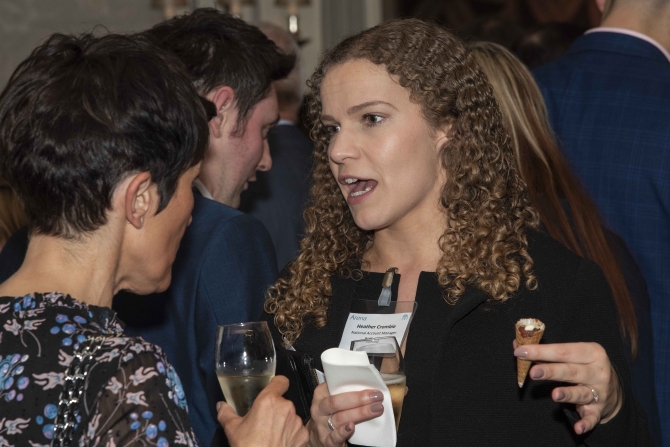 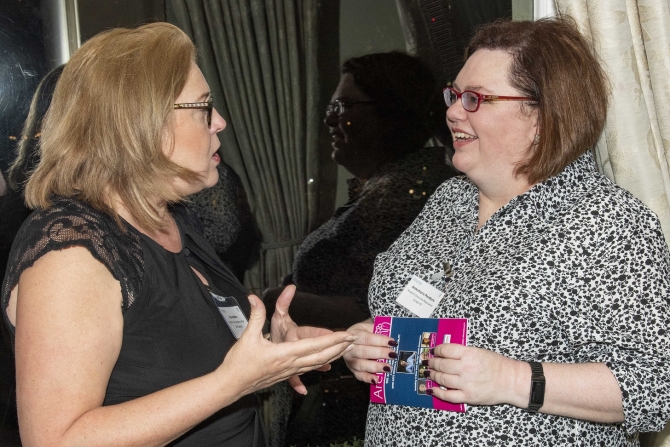 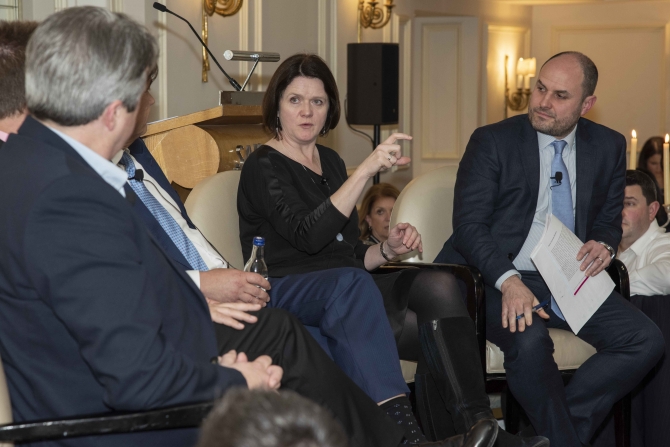 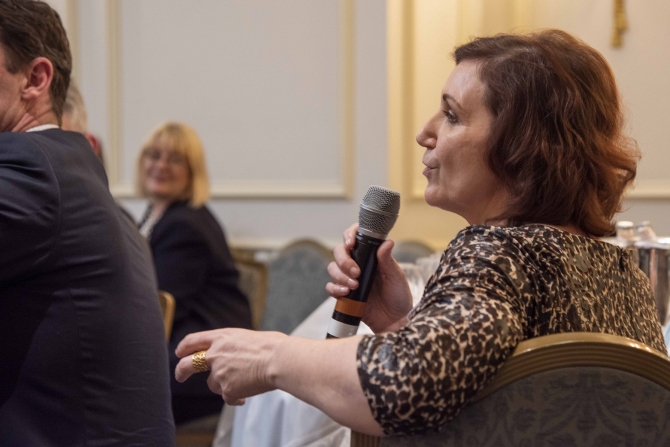 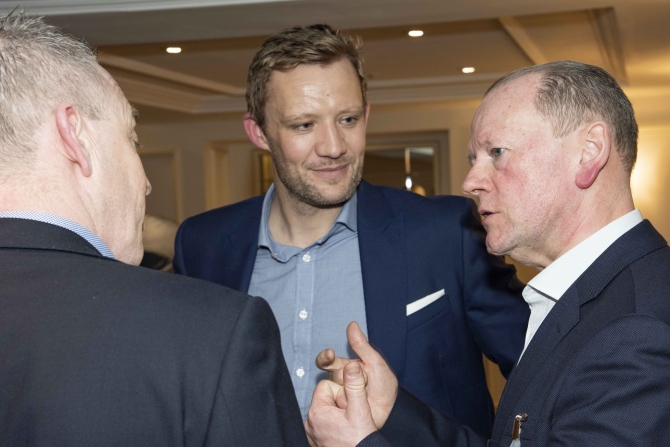 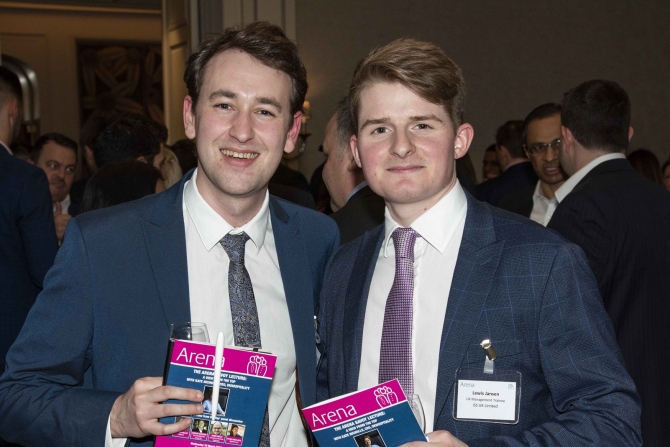 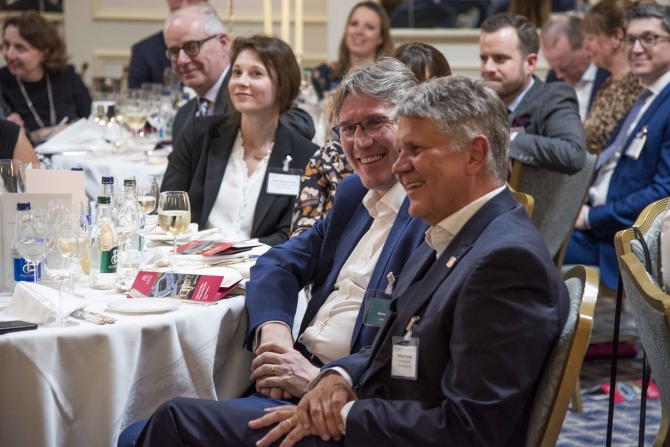 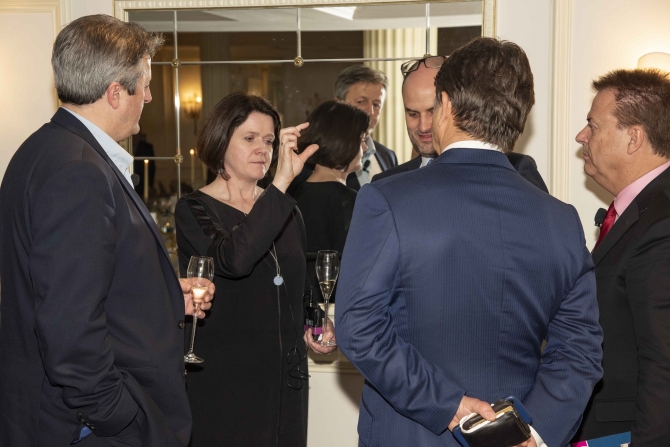 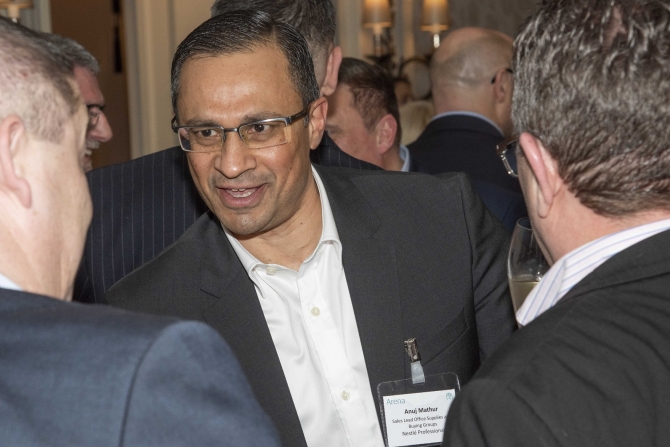 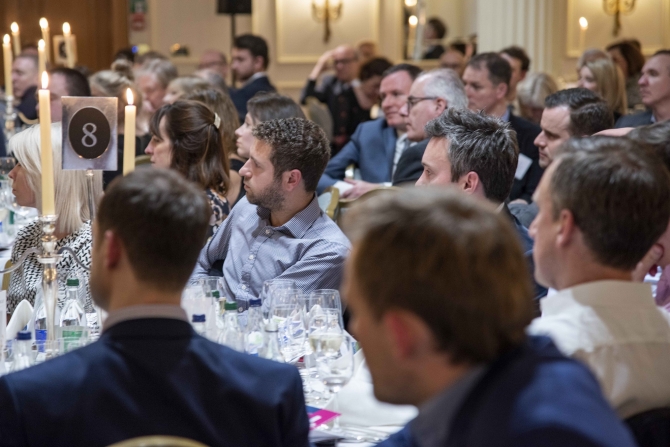 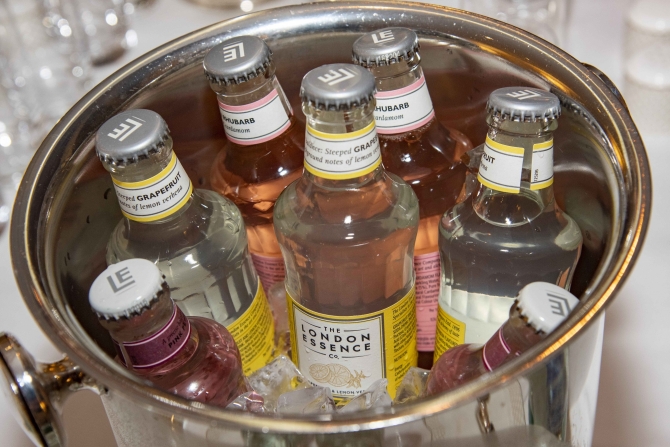 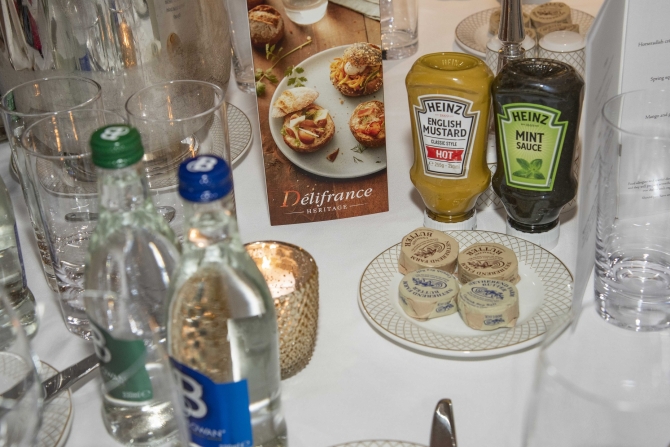 On the evening of 20 March 2019, the Arena Savoy Lecture welcomed back Kate Nicholls, CEO of UKHospitality – the national trade body that represents all hospitality sectors, to discuss Brexit and its impact on the industry.

When Kate Nicholls first agreed to deliver the Arena Savoy Lecture, she had anticipated (like most of us) that, just nine days before the UK was due to leave the EU, the Brexit deal would be sorted and settled, and focus would be on the next phase and how the industry can prepare for the months ahead. But, with the drama still constantly unfolding in Westminster, this was not the case.

‘Anyone who says they know how Brexit will be is lying’, said Kate. And, from someone so close to Westminster – she has weekly Brexit planning breakfasts with Michael Gove, monthly meetings with No10 and quarterly meetings with the Chancellor – she is probably the best-placed person in the industry to know.

One year ago, UKHospitality was created from the merger of the BHA and ALMR. A collaboration that happened, according to Kate, at the moment of a perfect storm. The new body represents 70,000 outlets and by speaking in one voice, the sector, for the first time, has the recognition it deserves and great strength and depth when talking to Government.

Our £130bn industry was the best kept secret. People didn’t realise how big it was. It’s bigger than the aerospace, automotive and pharmaceutical industries put together, it gives £40bn back to the Government in tax (that’s the equivalent of the Brexit divorce bill), it employs 2.9million people, and it’s in the top five for employment in every region of the UK. It’s size, scale and importance matter, and have been key to making UKHospitality front and centre in the Brexit debate.

Brexit hasn’t been the only thing on UKHospitality’s agenda. In the last year, it’s been tackling other industry challenges, such as the ‘war for talent’ and the unnecessary cost of doing business. Last year, the Government endorsed in principle a crucial tourism and hospitality sector deal that will see them back a three-year recruitment and retention campaign. This, explained Kate, is a fantastic opportunity to address the age-old challenge of making hospitality a career of choice.

UKHospitality is also continuing to campaign for further cuts in business rates; addressing the challenges in lifting the lowest paid out of low pay in a way that’s affordable for businesses; and researching a digital sales tax and how to help the high street.

The initial impact of the leave vote was on people; those coming into the UK as visitors and workers. We’re an ‘export industry’ and it’s important that tourists (two thirds of which come from Europe) can come in without hindrance and extra cost. It’s also important that they feel welcome, a sentiment that dropped after the vote and hasn’t yet recovered. The Government has confirmed that there will be no restrictions on visitors coming into the UK, even if there’s no deal.

With 25% of our workforce coming from overseas and half of these from the EU (this rises to 80% in London and the South East), a Brexit deal has to support this workforce. Rights for all workers here now have been secured and if we leave with no deal on 29 March, EU workers can continue to come in and work, with no new migration process until January 2021.

Kate explained that we have a domestic workforce crunch until 2030 and we will have a shortfall without overseas workers. It’s therefore important that low-skill migration continues beyond 2021, as well as high skill. As the only sector still in growth, we can’t cut off our labour supply and, as Kate put it, “we need someone to make the surgeon’s coffee!”

Over the past year, the Brexit focus has shifted from people to food supply. 60% of food in the industry is imported from the EU, and if there’s no deal, prices will go up. “This is not project fear, it’s project fact!” said Kate. Food panic and consumer behaviour will have a huge impact, as will the strength of sterling and how it affects consumer confidence.

For all these reasons, UKHospitality’s focus has unashamedly been on Brexit and ensuring Government understands the vital role we play in keeping the nation fed.

When asked how we make the industry more attractive to fill the aforementioned domestic 18-24-year-old workforce gap, Kate was clear that we have to change our messaging and entrepreneurial young people need to be our voice. We need to stop talking in negatives (long hours and hard work are not unique to hospitality) and we must start celebrating the fantastic opportunities that allow young people with ambition to quickly rise form back-of-house to general manager, for example. “Our industry is the ultimate meritocracy and we don’t sell it!”, exclaimed Kate.

A view from the top

Chaired by James Beilby, CEO of the FWD, the discussion drew on findings from William Murray’s Delve insights tool, which tracked online comments around food, drink and Brexit ahead of the event. With 6,000 mentions of Brexit and food in just one month, it’s certainly a hot topic.

It was a fascinating debate, which focused predominantly on food supply, that created a feeling of camaraderie in the room. With the industry described as being full of very optimistic people, it’s no surprise the conversation was level-headed and, on the whole, pragmatic and positive. Here are the main outputs from the panellists and audience questions:

Summing up, Kate reminded the audience that this is just the end of the beginning. When the Brexit deal is passed, and Kate believes it will be as the public has had enough, then the work on the transition period starts.

A big thank you to all our speakers and sponsors whose contributions made the evening a resounding success, and to our members and guests for their continued support and their generosity in raising over £850 in the charity raffle for Hospitality Action and Springboard.