An Audience with Tom Kerridge

Arena members and guests spent an exclusive evening with the celebrated and popular chef, Tom Kerridge. Tom headlined a special ‘An Audience with…’ event at the magnificent Corinthia Hotel, London. Guests enjoyed an inspiring and intimate insight into Tom’s motivations and aspirations. He explored the life events, opportunities and challenges that have shaped his phenomenal career, bringing them to life with entertaining anecdotal stories. Tom also shared his thoughts on the latest industry hot topics and what the future may look like. 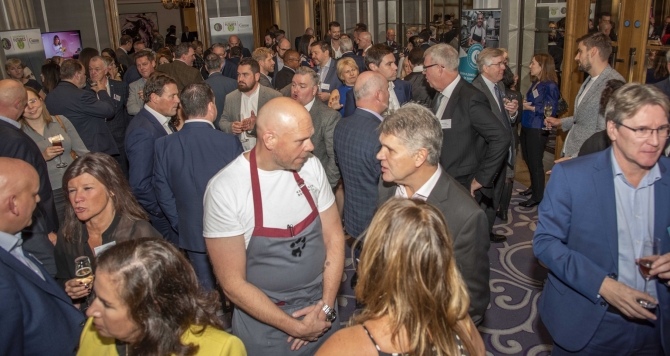 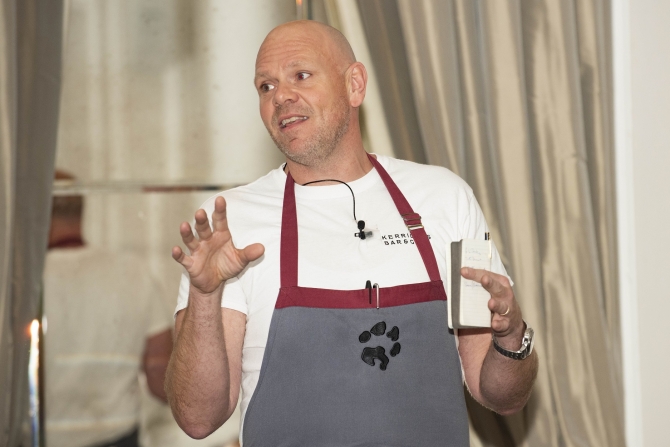 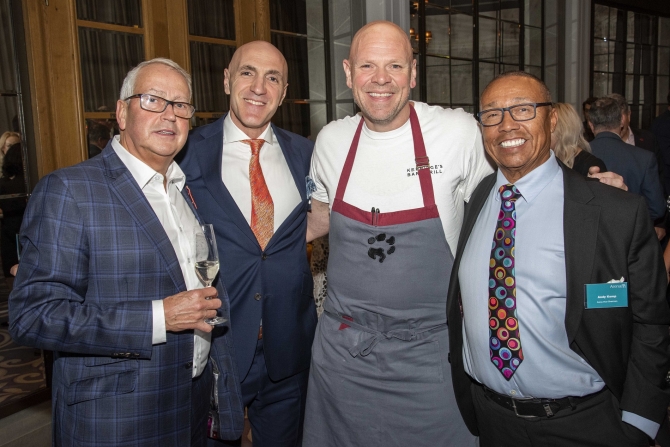 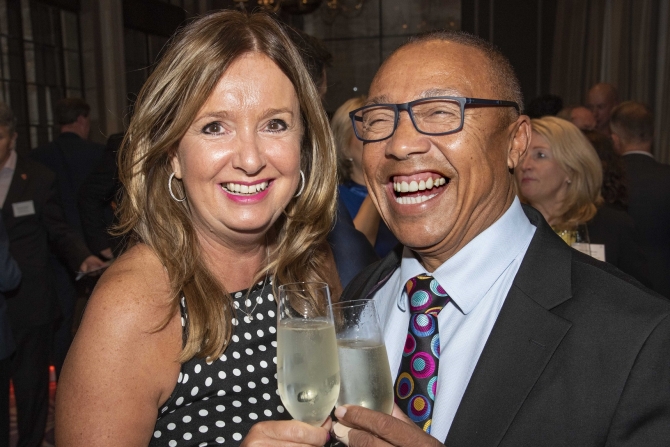 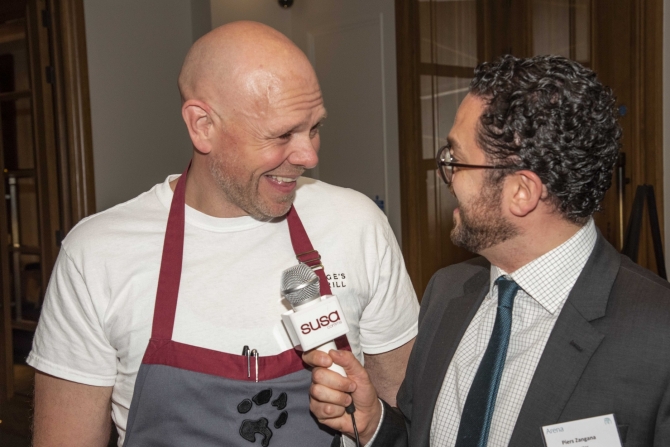 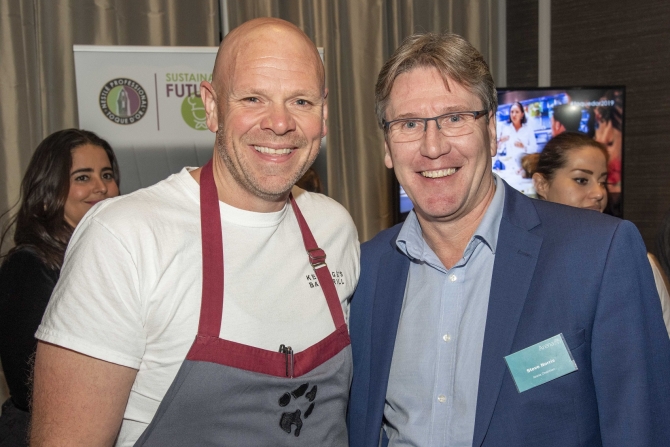 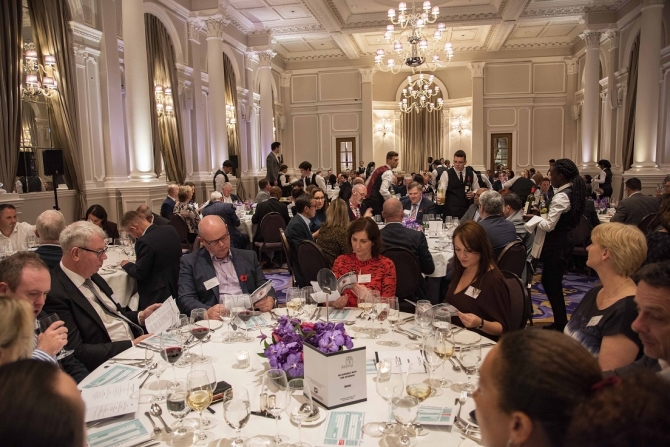 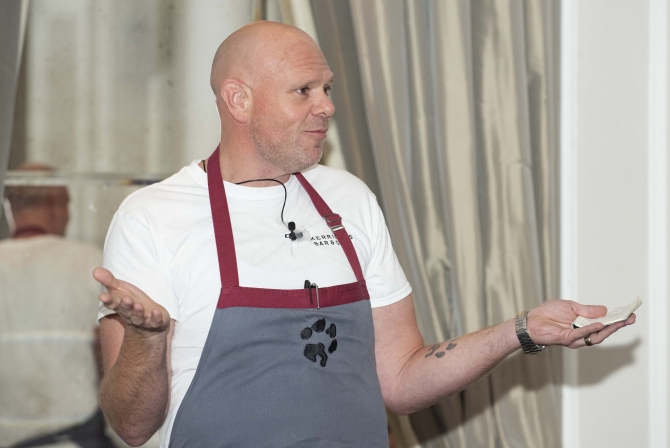 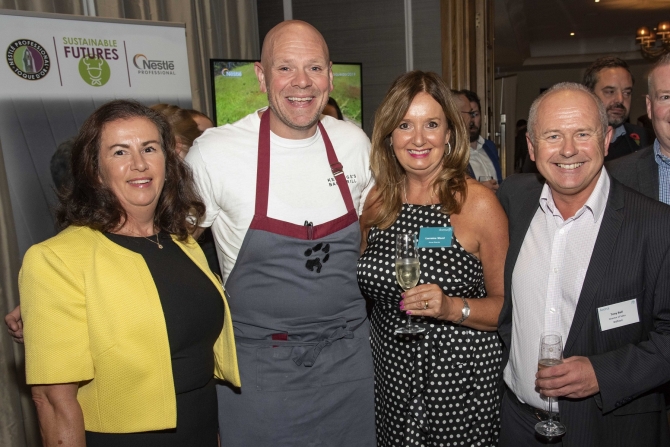 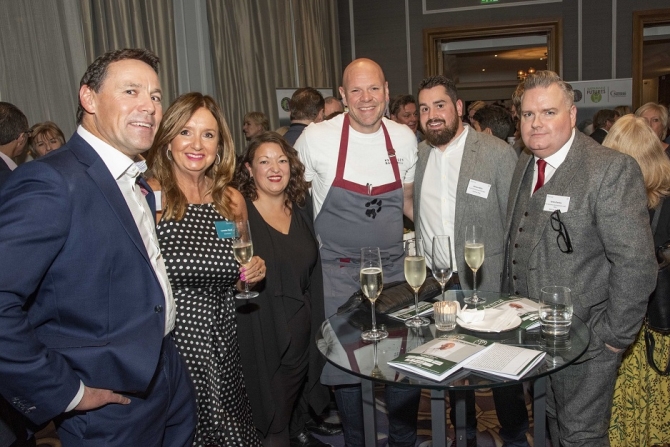 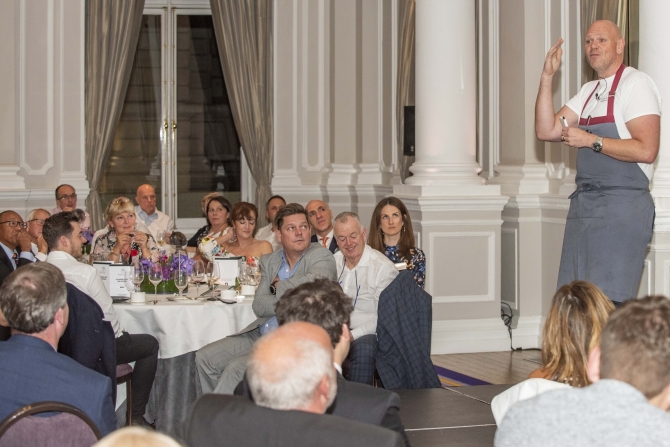 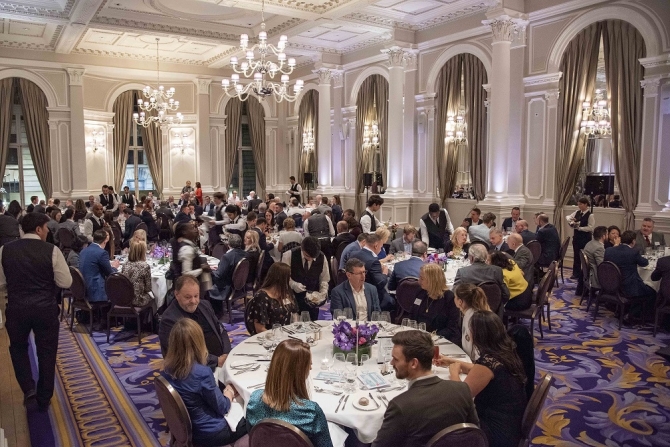 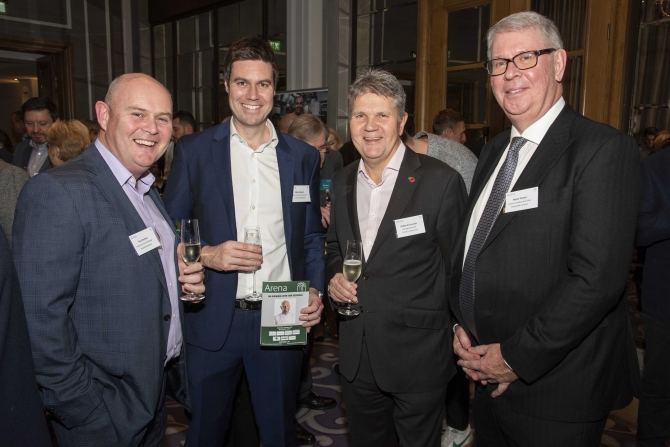 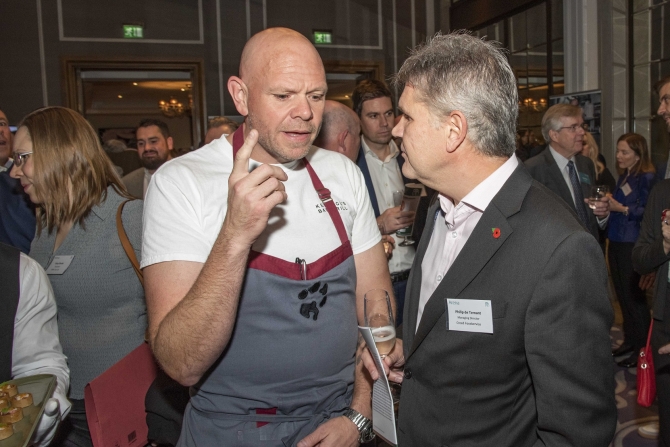 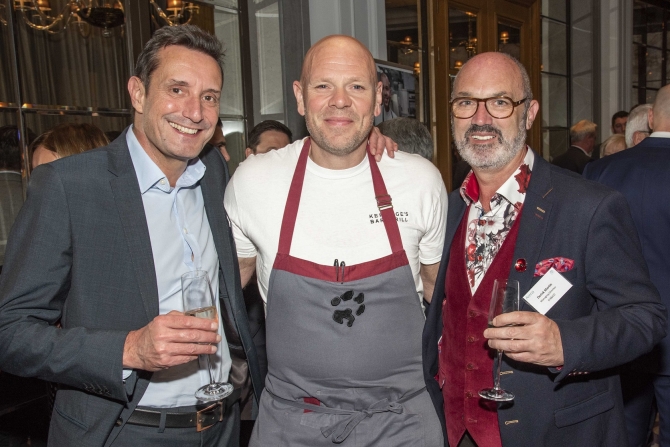 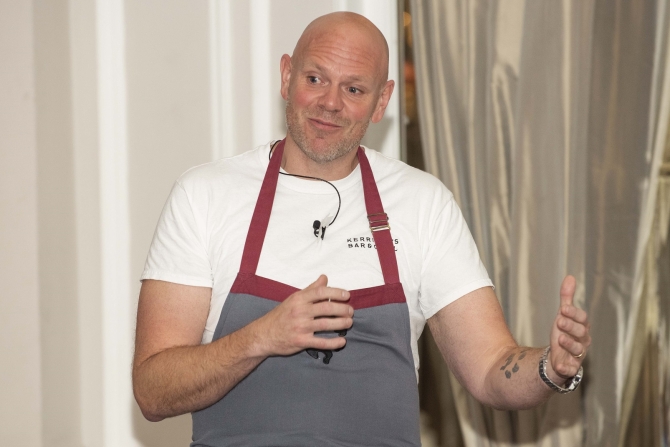 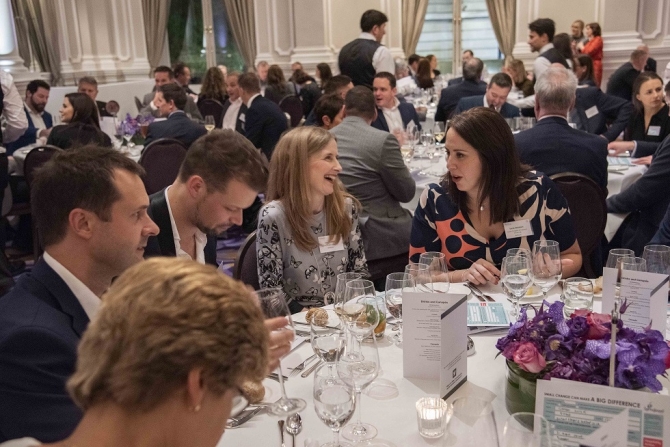 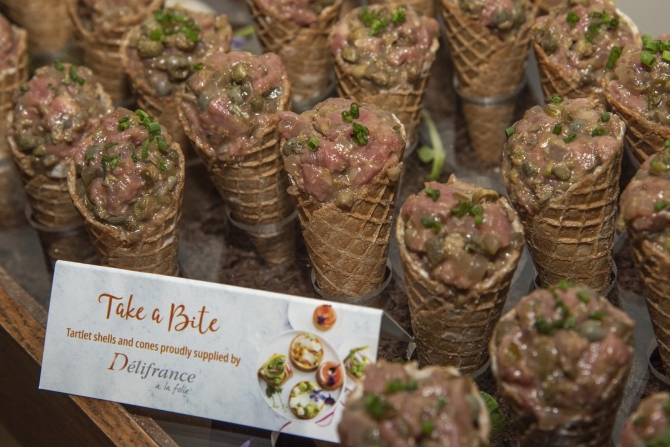 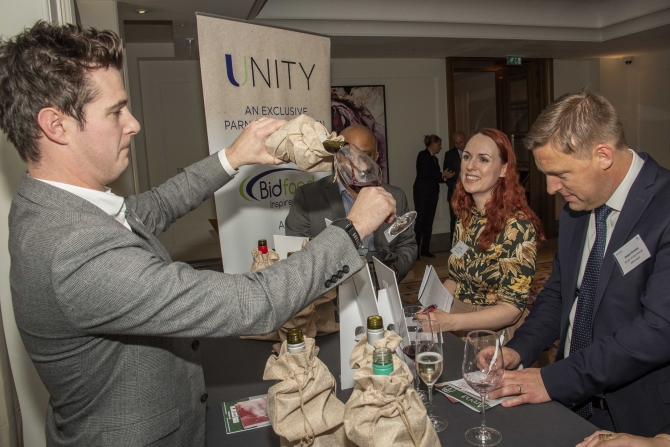 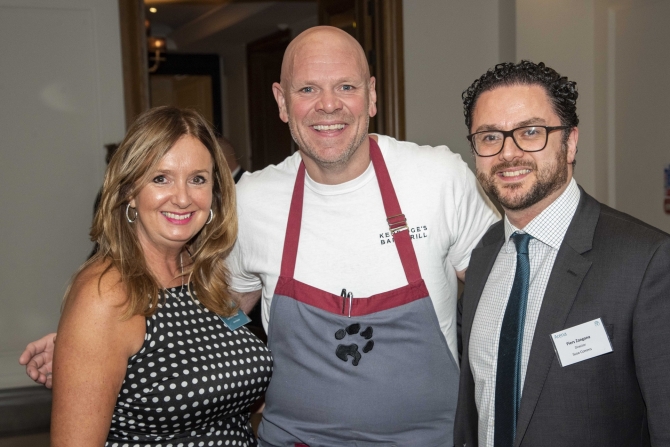 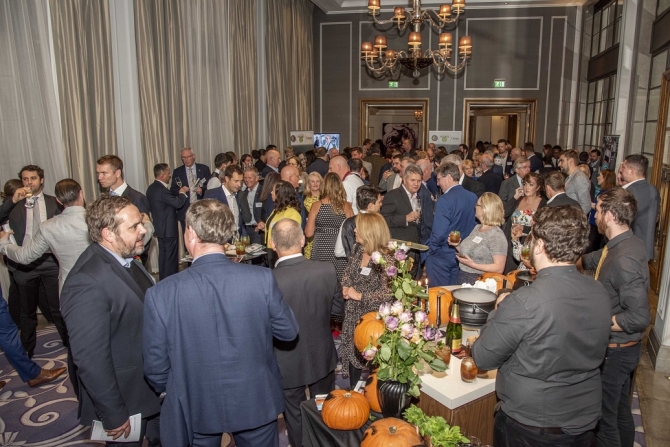 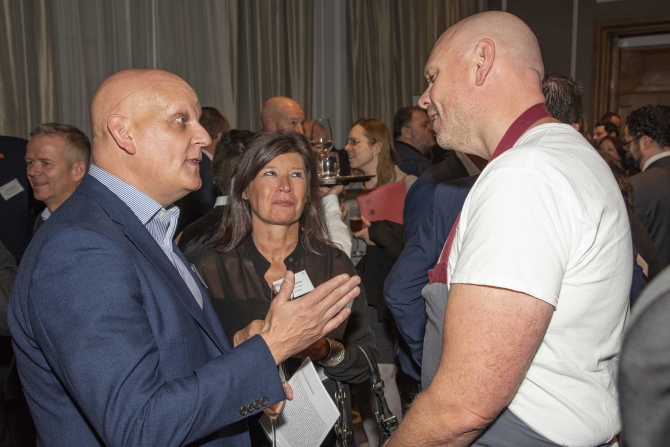 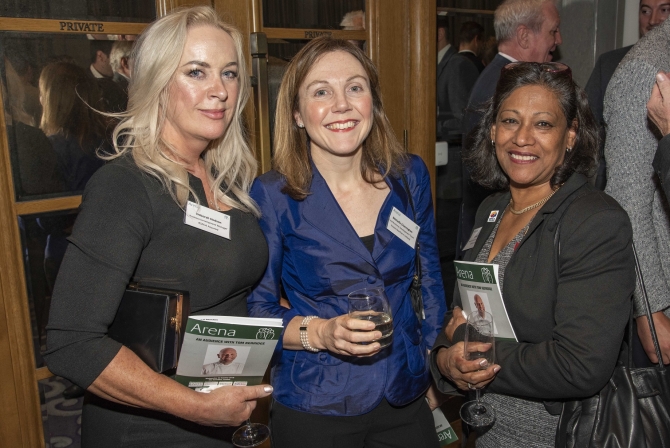 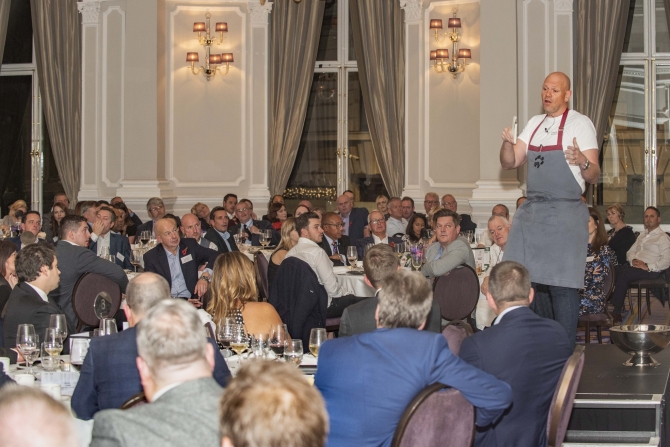 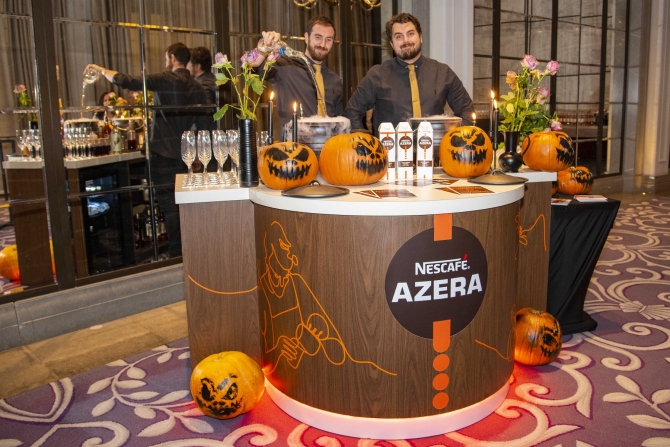 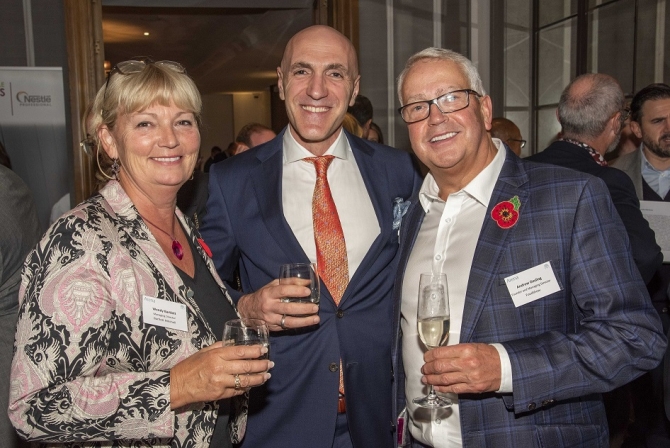 “Say yes to everything”

These were the words of advice that Tom Kerridge gave to the audience at Wednesday’s event.

Over 130 guests gathered to enjoy a drinks reception, three-course meal and a lively and engaging talk from Tom about his career, at the stunning Corinthia hotel in London.

Following networking in the Courtroom, guests moved into the beautiful Ballroom for the three-course meal.  A starter of Baked heritage beetroot, burrata, crisp parmesan and sorrel preceded Roast rump of lamb with grilled artichoke, rutabaga rosti, curly kale and ricotta, followed by a dessert of London honey mousse and poached Brogdale Farm pear.  Paired wines were served courtesy of Unity Wines and guests finished the meal with Nescafé Azera coffee.

After the meal was the eagerly awaited talk from Tom.  Introducing himself as the ‘fat kid from an estate in Gloucester’, Tom shared his career journey.

Unlike many of his peers, Tom never knew he wanted to be a chef and his first involvement with food was making pot noodles and fish fingers for his little brother. But, every Wednesday, the family would get together to cook a meal from scratch, ready to eat on a Thursday.

Never really that interested in school, Tom had a couple of ‘doss years’ aged 16-18 and then was introduced to the world of acting after mixing with ladies from Cheltenham Ladies College.  It was good money for a lad of that age but when his name appeared as ‘Thug 1' in the credits of an episode of London’s Burning, he decided it was time to get himself a proper job.

He started washing pots at a hotel in Gloucester and fell in love with the industry.  It wasn’t just the food but the front of house, the space and the energy. Aged 18, the industry found him and he’s never had that Sunday night feeling about going to work.

From there, he went to Calcot Manor as a commis or ‘general dog’s body’ and was promoted to pastry chef, where he developed his own ‘cheat’ technique for soufflé.

But, he wanted to get to London and in his early 20s landed a role at The Capital Hotel.  Going from the sleepy West country to the vibrancy of Knightsbridge, he loved every second.  London was where he wanted to be and he worked with Steven Bull and Gary Rhodes, who taught him not to over-complicate things.

A move back to the country saw Tom run the Michelin-starred Adlards in Norfolk before he and his wife, Beth, made the leap to set up on their own.  After re-mortgaging the house and maxing out two credit cards, they bought the Hand & Flowers for £45k and one year later, won a Michelin star.  It was the opportunity that they wanted to serve really fantastic, first class food in a relaxed environment, with no pretence.

In 2009 Tom returned to TV, as a great British chef for the Great British Menu, where he was crowned winner two years in a row and this was the start of more TV work.

When recession hit, Tom felt the pinch and there was no shielding behind the Michelin star.  He put a £10 lunch menu on, just to ‘get bums on seats’ and on a Friday, he would work through the night to bake 150 loaves of bread to sell at the Saturday farmers market, pulling a 48 hour shift over the weekend. Profit from the farmer’s market was used for the family’s weekly supermarket shop.

In 2011, Tom got his second Michelin star which was a great platform to build on and he opened The Coach.  Taking no bookings, it’s a neighbourhood restaurant and then followed The Butcher’s Tap.  According to Tom, it doesn’t make a great deal of money, but he’s pleased to have kept a pub a pub and not see it turned into yet another high street coffee shop.

Events are also in the mix.  The Pub in the Park festivals which are all about making food fun and vibrant pull in 25,000 people and a partnership with Levy UK (Compass) has seen his involvement in the hospitality experience at Twickenham, among others. And, November will see the opening of Tom’s latest venture in Manchester.

At the end of his speech, there were no shortage of questions for Tom, which covered a range of topics.

He sang the praises of the Michelin system, highlighted the virtues of his profession – celebrating great ingredients and cooking techniques, and said we all need to work harder to address the skills shortage and put mental health on the agenda.  He is a great supporter of the valuable work Hospitality Action carries out.

If he had to choose three chefs to cook for it would be Sat Bains, Paul Ainsworth and Claude Bosi.

When Lily, the Nestlé Toque D’Or champion asked for advice, he said ‘say yes to everything’ and step out of your comfort zone.  An easy day at work is a rubbish day. Don’t chase money, chase experience.  If you chase money, you hit a ceiling, but chase experience and there are no limits.  There are no mistakes, just learning curves.

When thanked by one guest for being authenthic, he replied; “People often say that to me.  But, I don’t know how to be anything else….”