Entrepreneur and astute businessman Luke Johnson provided the exciting finale to the 2012 calendar of Arena events. Probably best known for his immense impact on Pizza Express, Luke’s incredible CV, which also includes starting the Strada restaurant concept from scratch and former chairman of Channel 4, made for a fascinating post-lunch address. 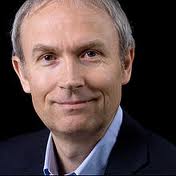 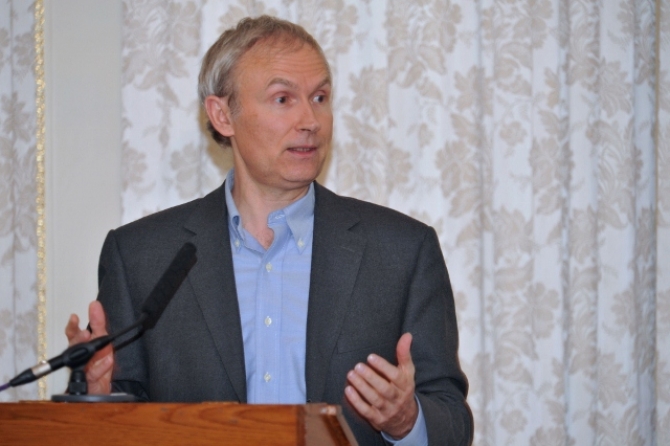 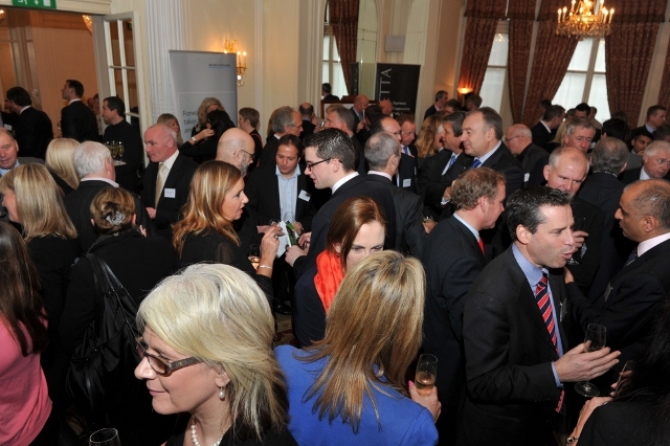 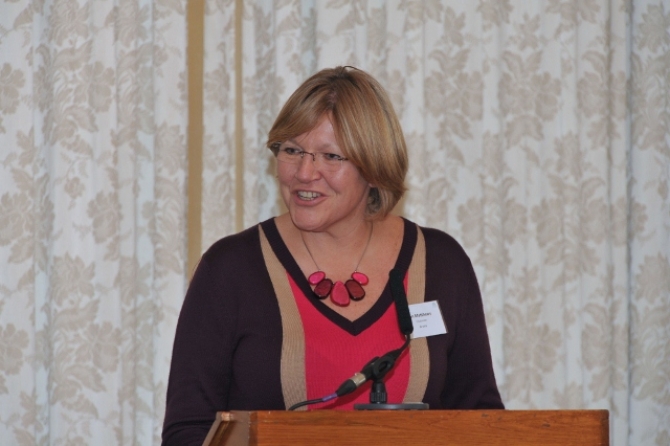 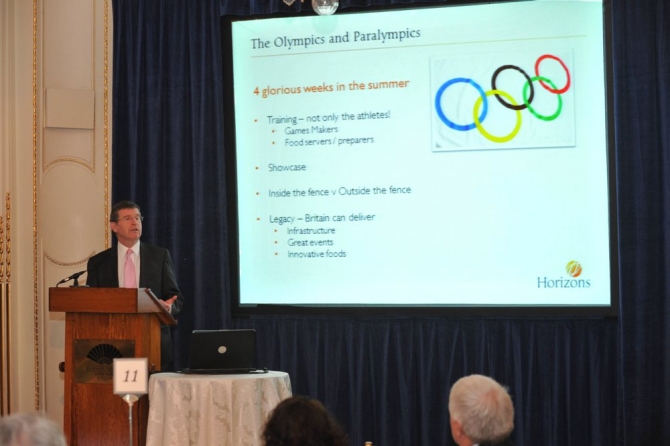 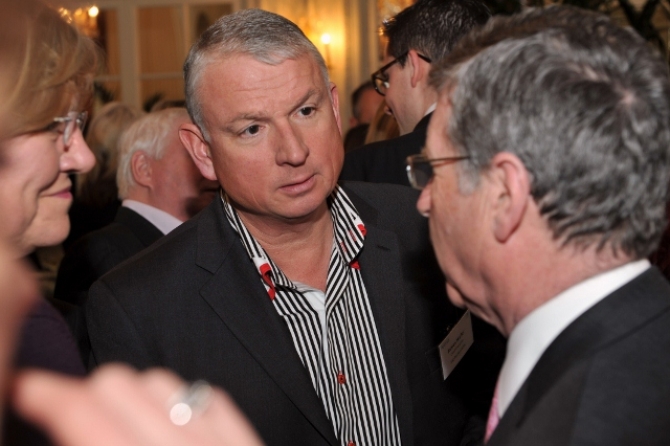 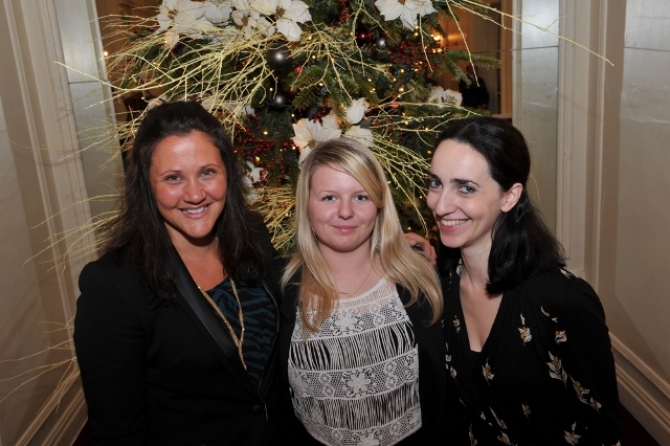 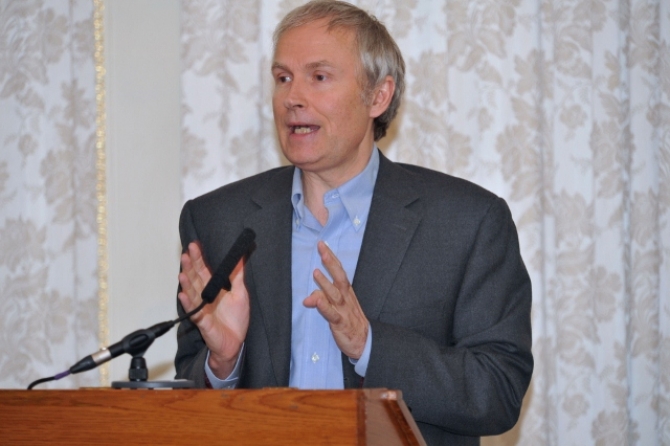 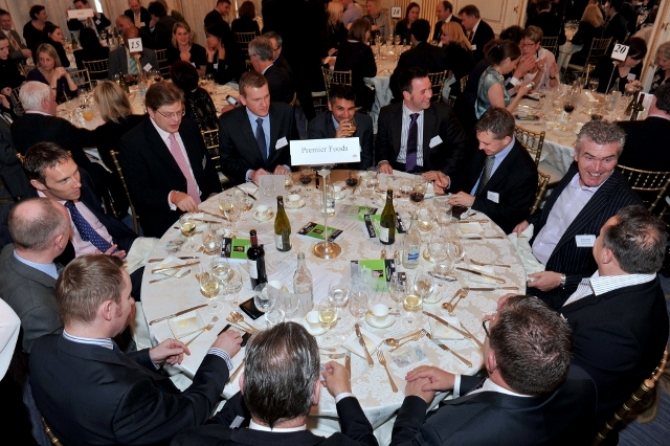 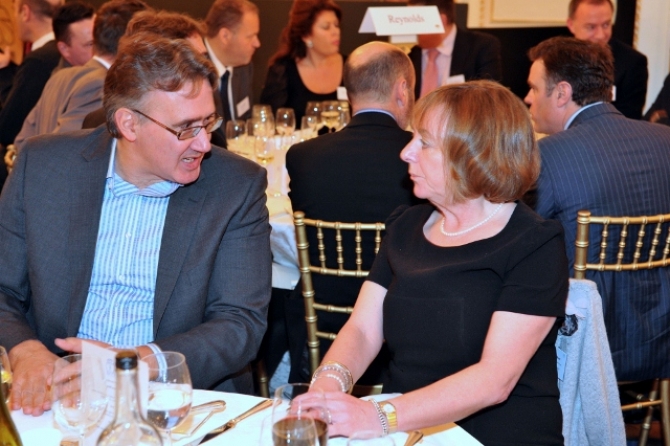 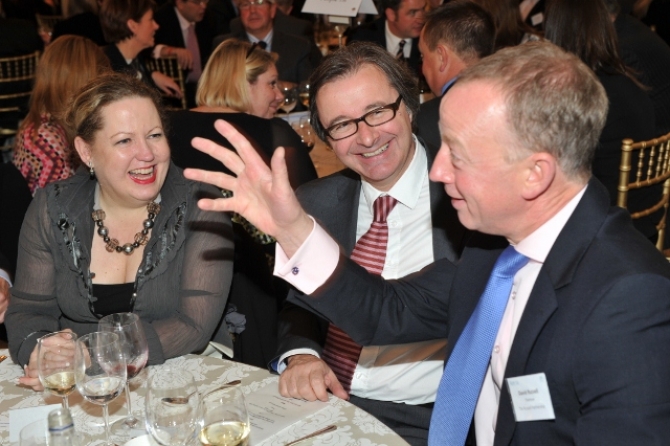 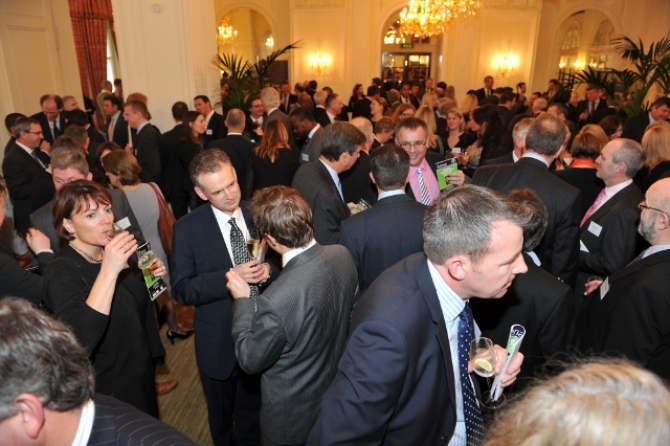 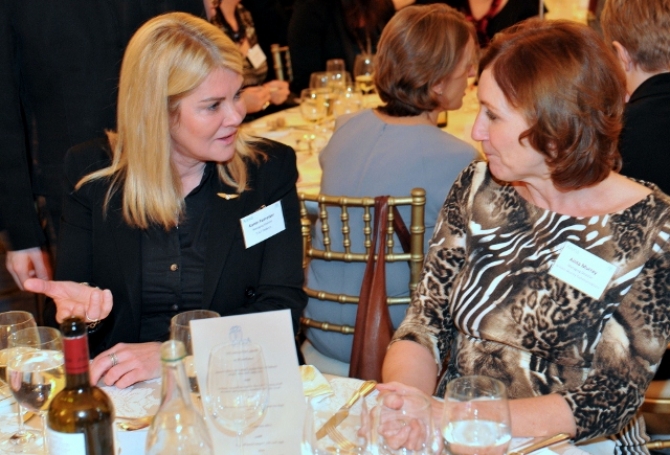 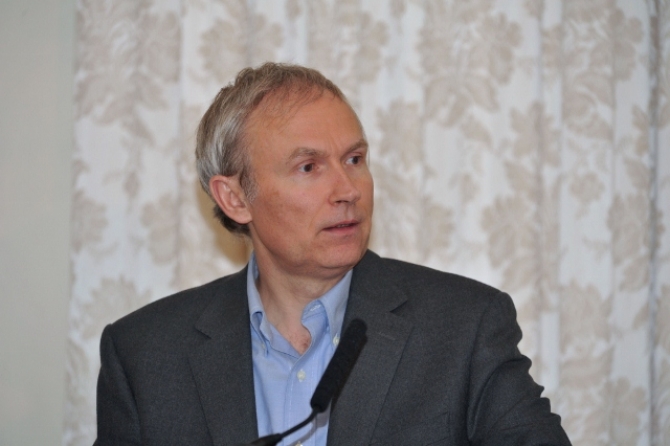 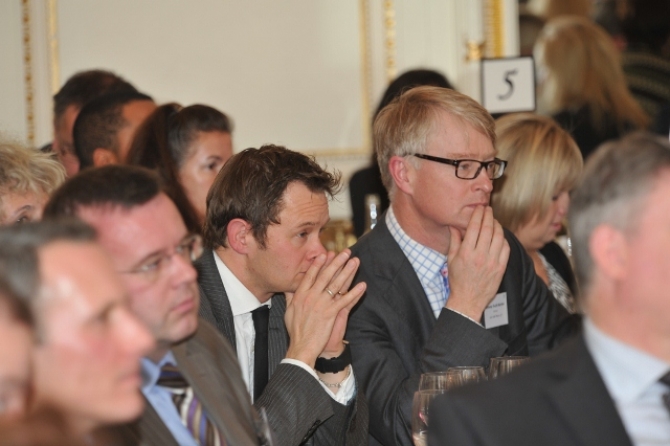 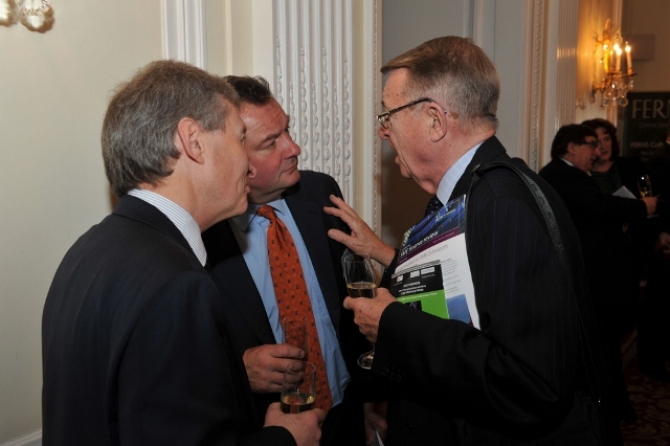 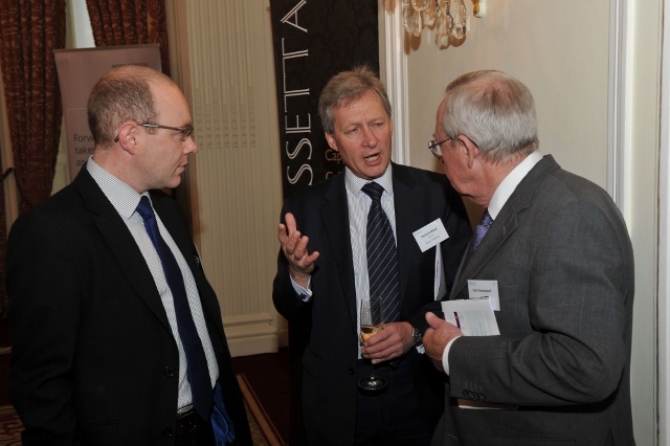 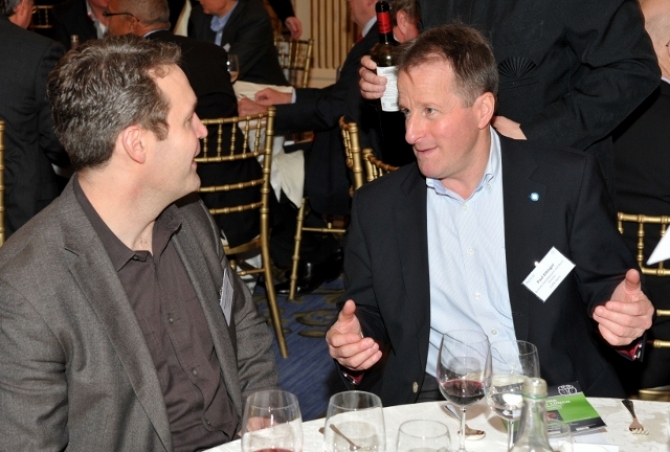 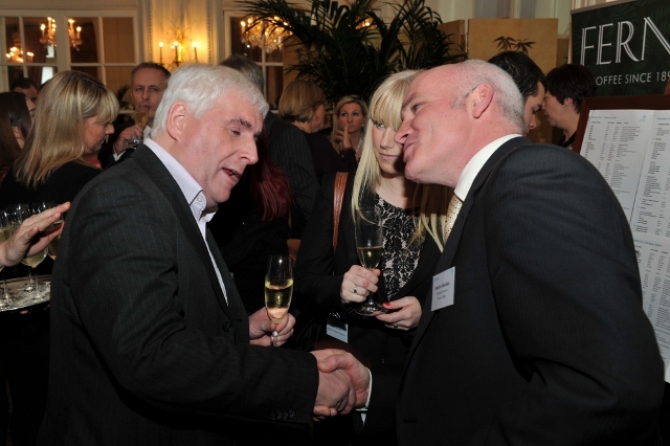 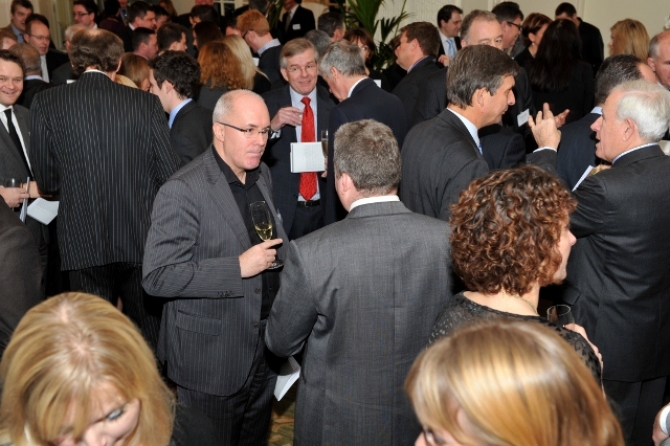 “Arena has finished the year on a real high!”

These were the enthusiastic words of Jan Matthews as she addressed the audience at her inaugural event as Arena’s first female Chairman – the magnificent Arena Christmas Lunch on Monday 3 December.

And Jan wasn’t wrong!  This year’s Christmas Lunch was the best ever.  The ballroom at the Mandarin Oriental was bursting at the seams as it played host to over 230 foodservice and hospitality professionals at the sell-out event.

The diverse audience represented all sectors of the industry – from operators through to suppliers and distributors – but on this occasion they were united with a common aim, to make face-to-face contact with fellow industry colleagues, old and new, and to hear from the revered hospitality entrepreneur, businessman and guest speaker, Luke Johnson, Founder & Chairman, Risk Capital Partners.

Prior to the ‘main event’ attendees were given the opportunity to reflect on the past 12 months and gain an early insight into the condition of the industry with market experts, Horizons.

Using its knowledge, expertise and data, Horizons reported on the shape of the foodservice and hospitality industry in 2012, focusing on core operational changes, the ever evolving consumer, and menu advancements.  The leading headline was that, with Christmas still to come, early signs indicate that the 2012 market is worth £43.5 billion, which signifies a real decline of 1-1.5% - a result, amongst other things, of a continued lack of consumer confidence and the weather!

Looking forward to 2013, it was concluded that it’s a safe bet that we will be facing a similar economic background to 2012, with very little growth, if any, and more casualties to come.

However, the outlook is certainly not without a silver lining – after all, with 70% of consumers still eating out, it has become a habit in the UK, and although perhaps the frequency has dropped in hard times, the opportunities are still prevalent.  It is a question of maximising every opportunity put your way.  As Peter Backman put it, “companies have assets and they will have to sweat them.”

Horizons’ parting advice to operators was to embrace change, manage rising food and other costs, raise standards everywhere and employ the best people, and finally, to beware of the weather!

Following a lively (and noisy!) networking reception and a fantastic lunch, Luke Johnson took to the stage and treated the audience to a captivating, inspiring and entertaining  20 minutes, packed with opinion and insight.

Luke began by confessing that, probably like many in the room, his entrance into hospitality was not through a great master plan, but a rather haphazard route.  In fact, it was whilst studying to be a doctor at Oxford, that Luke discovered his entrepreneurial spirit and talent, and his love of hospitality.

Threatened with ‘the boot’ for throwing too many parties, he struck a mutually beneficial financial deal with a local nightclub to hold his parties on a night when the club was usually closed.  Luke was blown away by the queue gathering outside the door on the first night, and it was this first taste of the excitement that comes with making something happen  that sparked the realisation that he wanted to make a career out of ‘building things from scratch’.

Some 30 years on Luke has certainly achieved this ambition – and some!  His CV is a master class in hospitality entrepreneurial success, featuring the likes of Pizza Express, Strada, Giraffe, Patisserie Valerie, Gail’s, 3Sixty Restaurants to name just a few.

Luke’s passion for hospitality comes from the great opportunities of advancement it offers.  It is an endlessly evolving market with innovation at the heart of it.  “The hospitality and restaurant industry offers the most opportunities for those who want to start their own business and be successful.”

The last 30 years is proof of this.  The UK has transformed from a ‘culinary wasteland’ to a country of increasingly discerning diners.  In fact Luke declared that the only other city in the world that competes with London is New York.  He believes that tourism offers a great economic opportunity for the UK, which we must take full advantage of.  “We have the locations, the language, the history, the culture, the hotels and the restaurants – and we’re even learning to smile and greet customers in a friendly way!”

Joking aside, service is of tremendous importance to Luke.  “It’s not the products you serve but service that guarantees success,” sums up Luke’s fervent belief in the power of good service.  The winners are those offering outstanding service because it creates repeat customers and loyalty.

Service, however, can still be very bad in the UK – in fact it’s what two thirds of all complaints are about.  During his Pizza Express years, when he read every complaint letter, Luke found that complaints were usually not about the original problem at all, but about how it was subsequently dealt with.

Surmising that good service doesn’t cost any more than poor, and gives you a huge advantage on the competition, Luke offered his top tips for getting it right.  These include  hiring the right people who are responsive and like working with the public; instilling pride in the organisation; a belief from the top to the bottom that the customer comes first; rewarding staff and treating them well; strong leadership; and sincerity and integrity.

The younger generation is another key area for Luke in guaranteeing the continued success of our industry.  He explained that the profession needs young people, their optimism and their verve and it is the young go-getters in hospitality, that don’t exist in other walks of life, that make our industry exciting
Luke urged more partnership between the generations, warning of the dangers of disenfranchised and demoralised young people and stating that those who resist are “condemned to decay”.

He explained that the beauty of the younger generation is that they understand technology better, are naturally more optimistic, have more energy, are flexible, dynamic and diverse, and they represent ‘creative destruction’ – in other words they are built to embrace change.

“Experience absolutely matters but so does imagination and vitality.”

It has been well documented in the press that Luke is passionately campaigning to reduce VAT for our industry.  At the Arena Christmas Lunch he affirmed his ambition to cut VAT to 10% or less to attract tourism and create jobs, clearly showing his dismay at the fact that supermarkets are exempt whilst hospitality pays over the odds.  He urged his industry colleagues to support the cause and branded the reluctant or disinterested larger chains as ‘mad’.

Luke left the audience with the upbeat, positive message that “history shows that the future always belongs to the optimist”.  He conceded that this does involve an element of risk but discipline, innovation, industry, and luck reward those that are willing to take the plunge.

Wishing everyone a Merry Christmas and prosperous 2013, he reminded us all that “we should feel proud of the work we do.”