On the evening of Monday 24 March 2014, Alex Fisher, Group Managing Director, Bidvest 3663, presented Arena's Savoy Lecture 2014 and addressed industry colleagues on the key issues affecting the hospitality and foodservice industry today. He gave the audience plenty to think about - and he also had a little surprise up his sleeve! 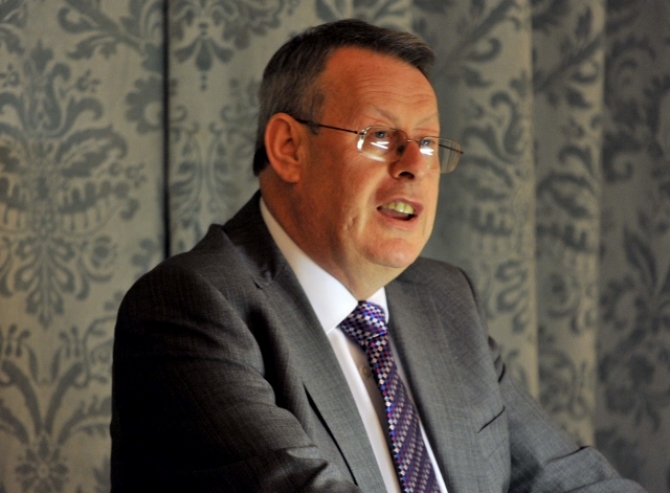 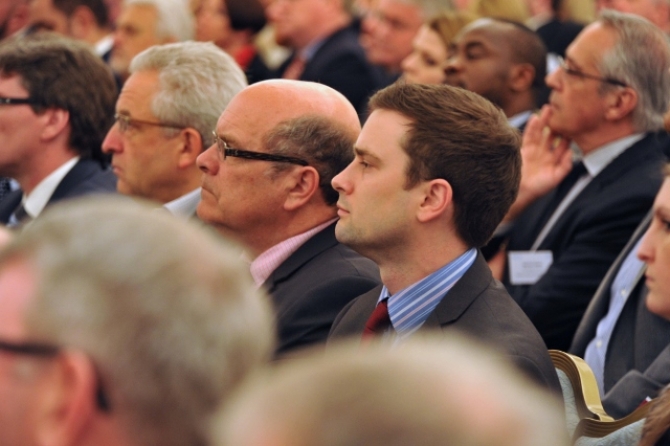 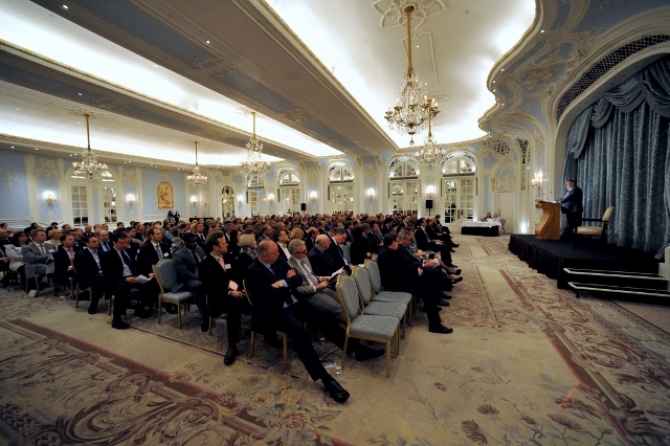 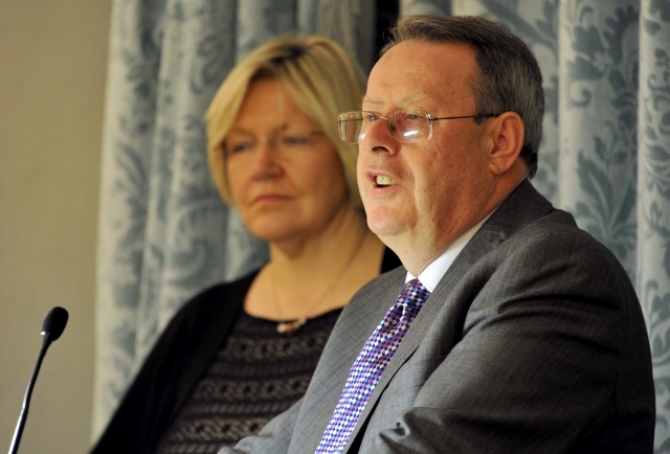 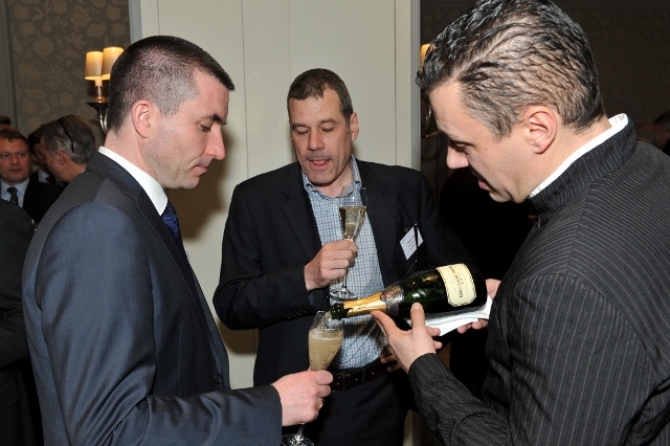 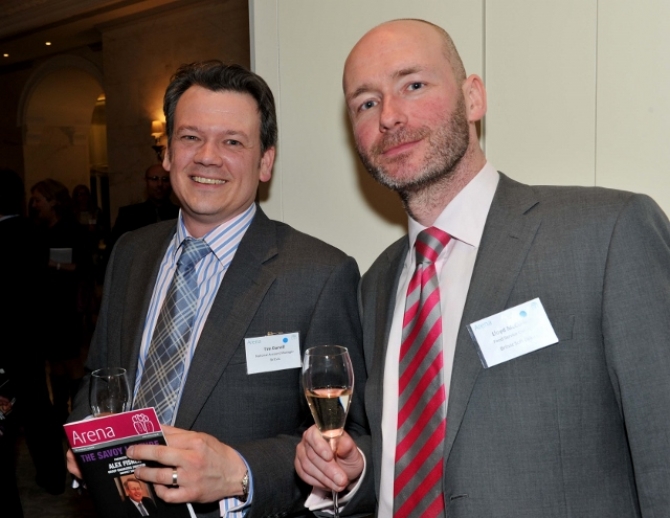 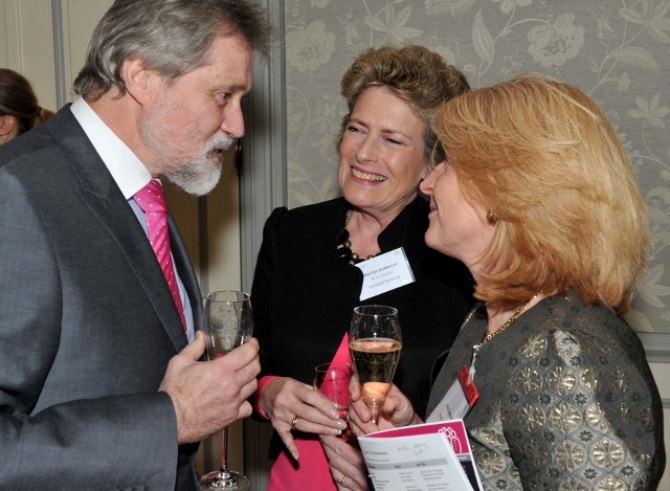 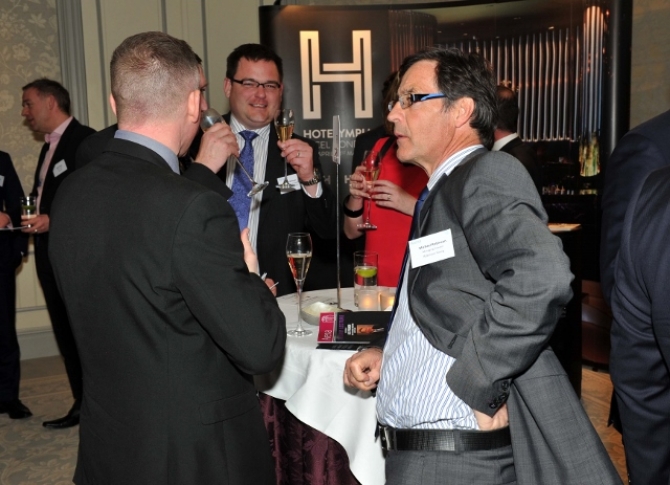 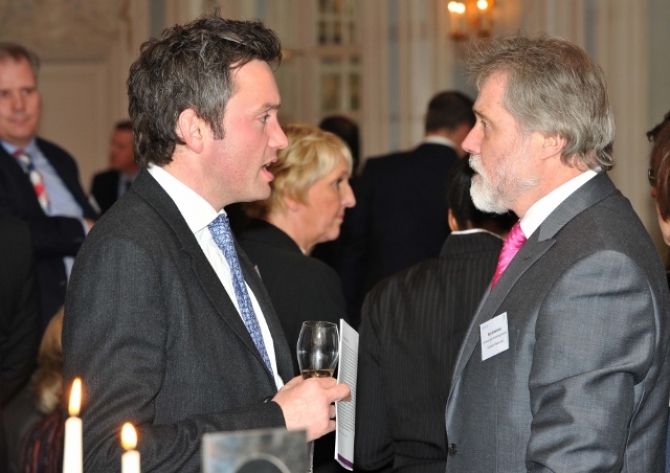 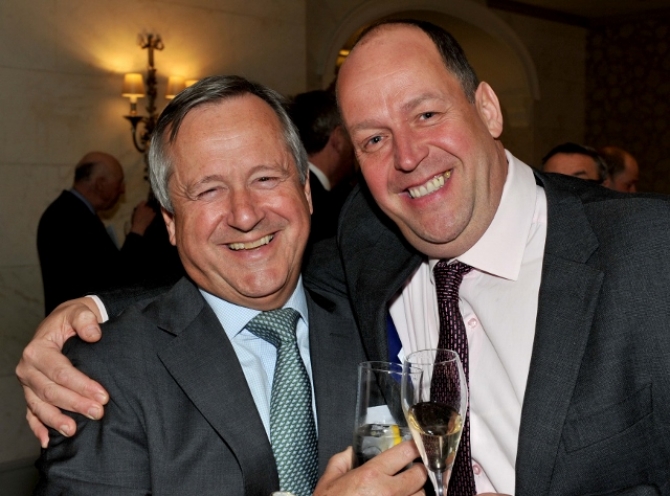 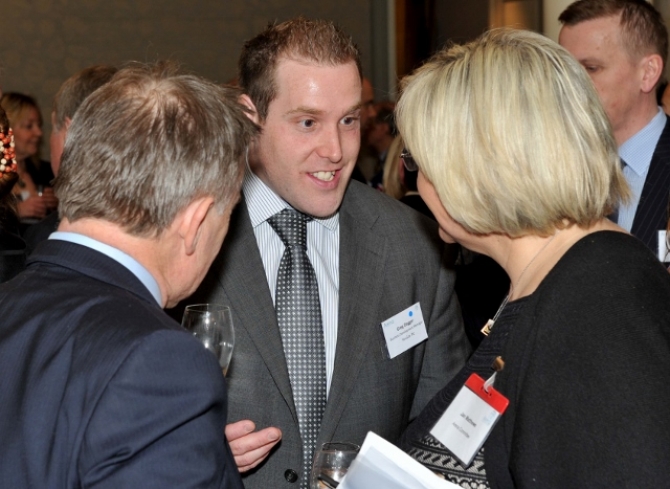 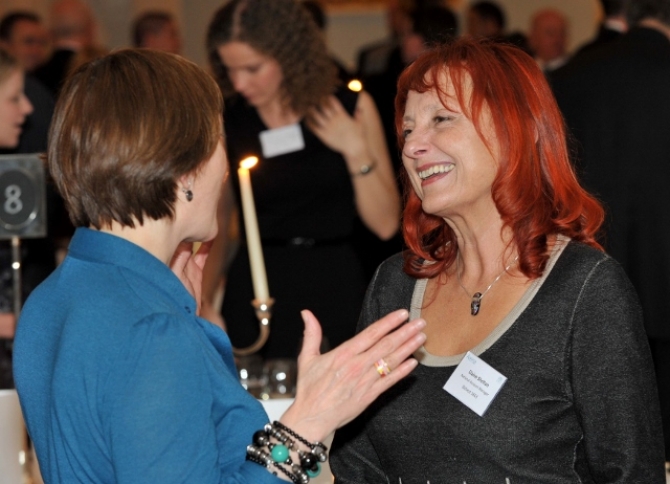 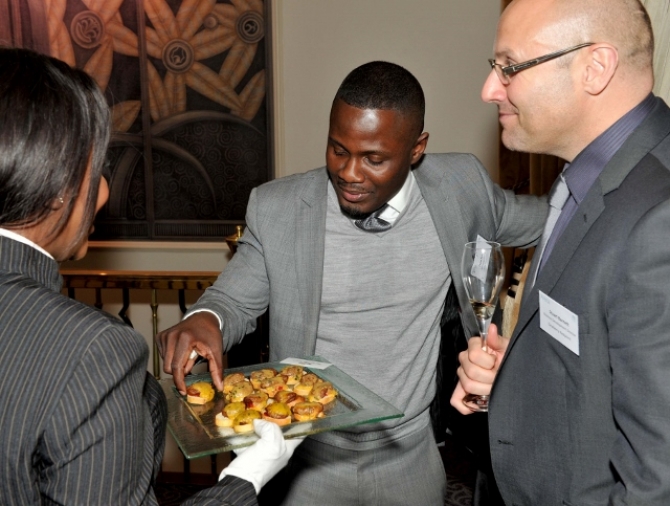 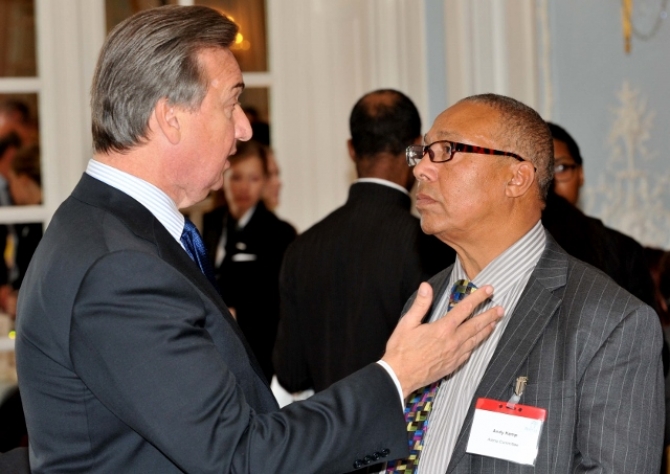 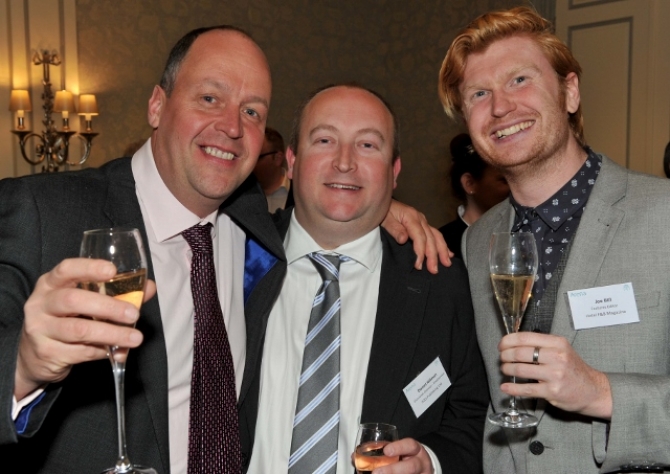 The foodservice and hospitality professionals seated in the ballroom at The Savoy on the evening of Monday 24 March got a little more than they bargained for when Bidvest 3663’s group managing director, Alex Fisher, took to the stage to deliver Arena’s Savoy Lecture 2014.

Introducing the presentation theme of looking at the key challenges, global issues and opportunities facing the industry, he invited the audience to tuck into a selection of delicacies he had brought with him – namely dried and flavoured critters, including crickets and grasshoppers.  His explanation for asking people to step out of their ‘food comfort zone’ was to highlight concerns for the increasing shortage of global resources and the potential future need for alternative proteins. The more adventurous attendees threw caution to the wind and courageously tucked in – but there were no signs of this new ‘bar snack’ catching on anytime soon!

Alex’s strong message throughout was the absolute need for the industry to be completely aware of and prepared for the emerging global macro trends, and the implications for the future of foodservice, so that we don’t get caught out.

With the use of eye-opening, and at times alarming, statistics Alex took the audience through the five core trends, planting possible scenarios and championing positive action.

Population growth was the first of the trends touched upon.  By 2020 the world will be home to 750 million more people than in 2010.  Putting this figure into perspective, Alex stated that by the end of his 25 minute lecture the population will have increased by 3568!  The growing population will put pressure on food supply and drive changes on what we eat – a consequence that naturally feeds the second trend of the increasing shortage of global resources.

As the vital resources of energy, water and land for agriculture are squeezed, food security will become a growing issue.  Alex asked if as an industry we are taking this seriously as part of wider CSR policies. Giving water as a prime example, he explained that 1kg of wheat needs 3000ltrs of water to produce and 1kg of meat needs 15000ltrs – quantities that in the long term are simply not sustainable, and present a real need to reduce the water footprint of menus.

Attitudes to food waste also need to be urgently addressed. Shockingly, over half of food produced in the world is lost.  In restaurants, analysis has shown that 65% of food waste occurs in preparation and the UK foodservice industry wastes some 3.4 million tonnes per year. The annual waste cost has been estimated at over £720 million! Alex called for better waste plans, for more industry players to sign up to the WRAP agreement, and for a united goal of zero waste.

Alex explained that overcoming food security concerns will demand a different approach to food supplies.  Replacements for meat proteins will need to be introduced including meat-free days, more unusual fish species and even the critters sampled earlier in the lecture. Alex argued that we will also need to open our minds to GM foods as a solution, such as a potato that is resistant to blight, stating: “If we can be assured of the safety of GM why shouldn’t we support it?”

Pharma foods is another development that could be a reality by 2020, with products combining food in the fields with drugs in laboratories, and boasting clinically enhanced properties to improve health, featuring on our menus.

Growing affluence is creating its own huge and growing global costs. It is feeding the growth of obesity and Type 2 diabetes, which have ceased to be rich country’s diseases. Alex warned that something needs to be done. More interesting and healthy food is required or we face taxation on unhealthy foods.

In addition to the growing population, the steadily ageing population presents new opportunities. By 2020, one billion people will be over 55 years old, and as more and more people continue to work into their 70s the perception of the grey market needs to change. They will hold 70% of all disposable wealth and Alex declared: “There will be a huge prize for those who identify and crack the demands of this market and get there first.”

The final trend is that of the growth of mobile technology. By 2020, everyone will have virtually all the information they need at their fingertips – including price transparency.  This will change the face of competition as the only thing that will differentiate businesses will be service and customer experience.  This will become the core driver of value and the consumers’ willingness to pay.

Alex confirmed that social media will continue to play a significant role in hospitality and foodservice.  It has already demonstrated its power through sites such as TripAdvisor, which has transformed the hotel sector. He said: “Social media is going to grow in importance for our industry.  So the sooner we get to grips with it the better.”

Speaking passionately about his desire to promote the industry as a career of choice, Alex said:  “It saddens me that our industry is not a first choice industry.”

As the third biggest employer in the UK and a key player in the economic recovery and future growth, contributing 4.9% of economic output, there is real need to nurture talent and publicise the sector.  With decreasing training funding potentially compromising its future, Alex urged the industry to pull together its resources.  He praised the likes of Springboard for their great work but asked: “Are we doing enough as an industry?”  He also challenged manufacturers on the common practice of poaching talented employees who have ‘cut their teeth’ in foodservice, and paying them more to work in retail.

In conclusion Alex posed three fundamental questions. How well do you recognise the challenges on the horizon? How well do you understand what action is needed? Are you equipped to respond to future changes?

These questions sparked enthusiastic discussion during the drinks reception that followed, and over dinner.