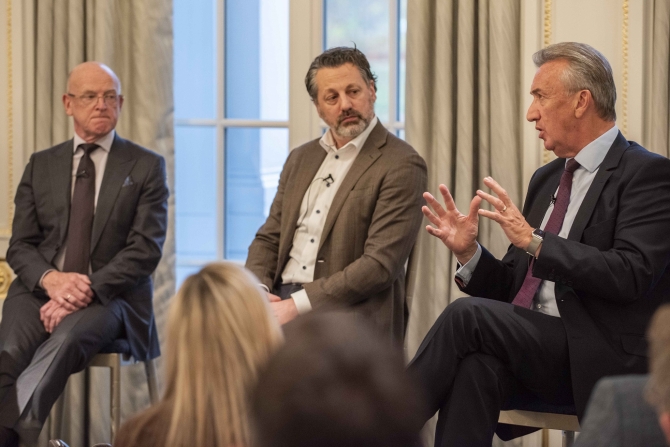 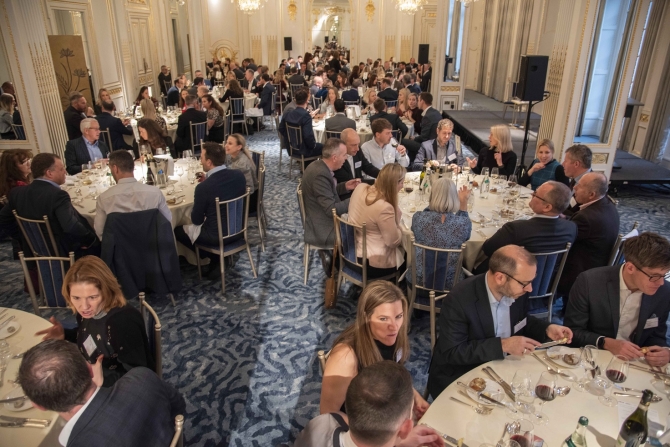 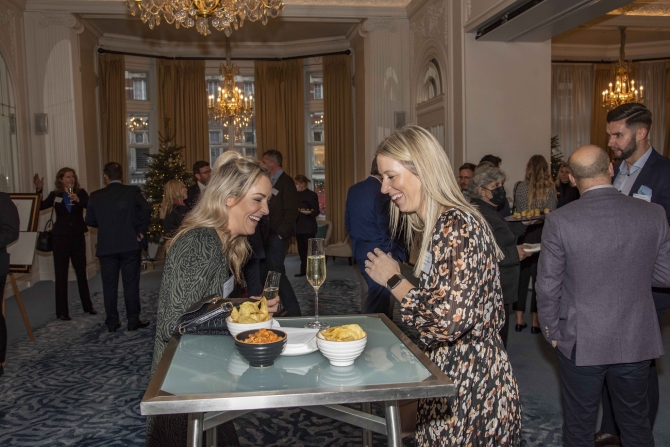 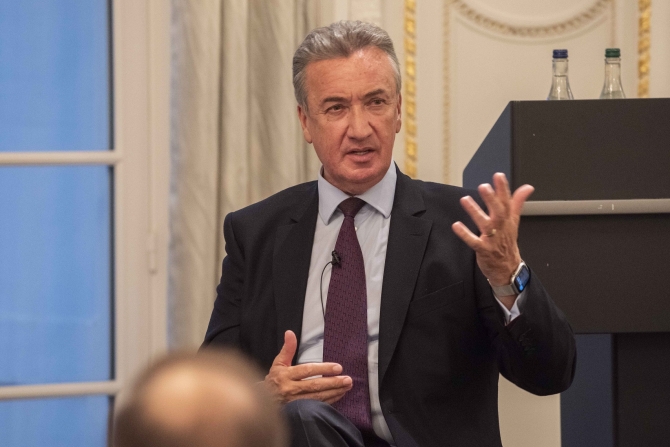 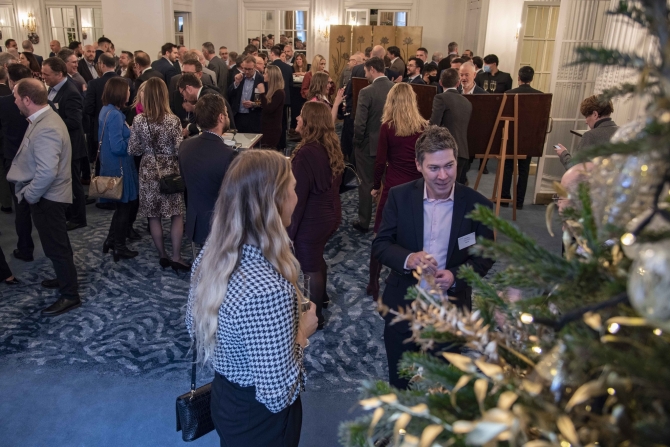 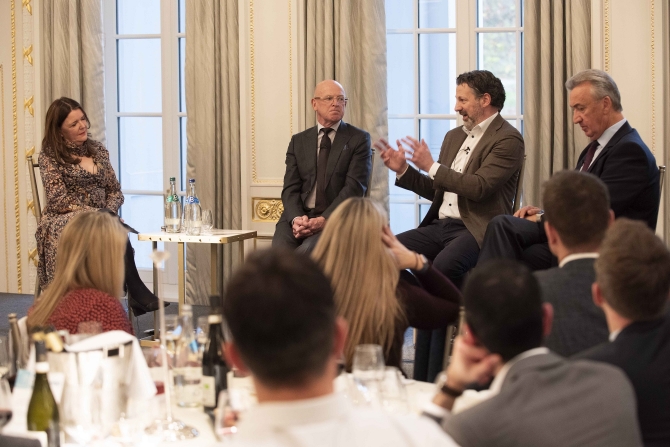 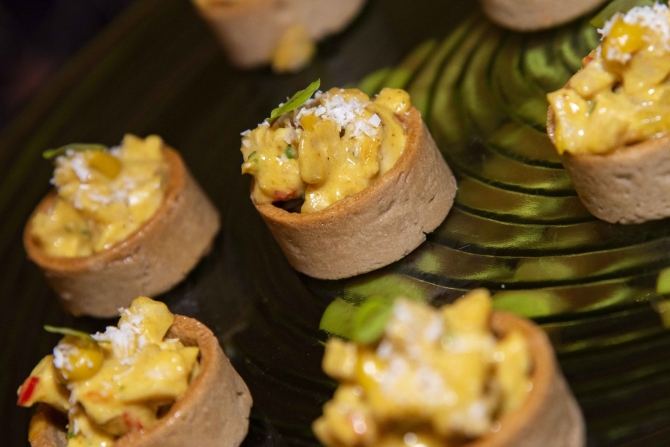 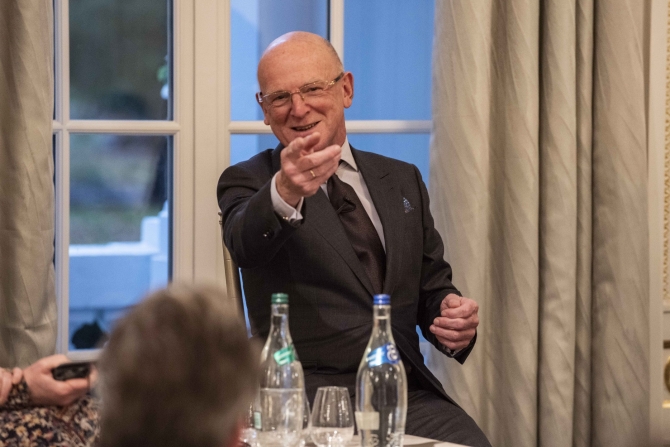 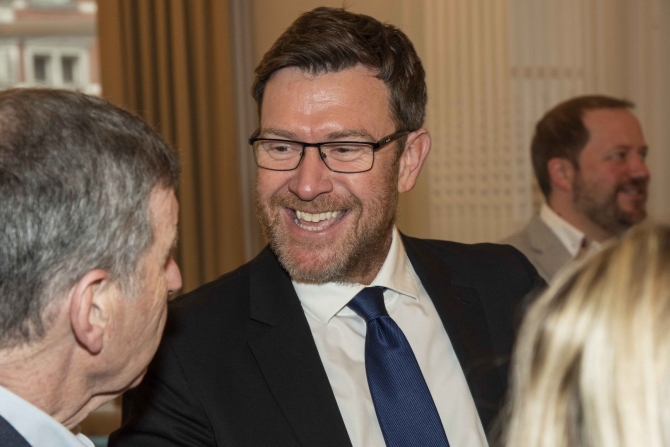 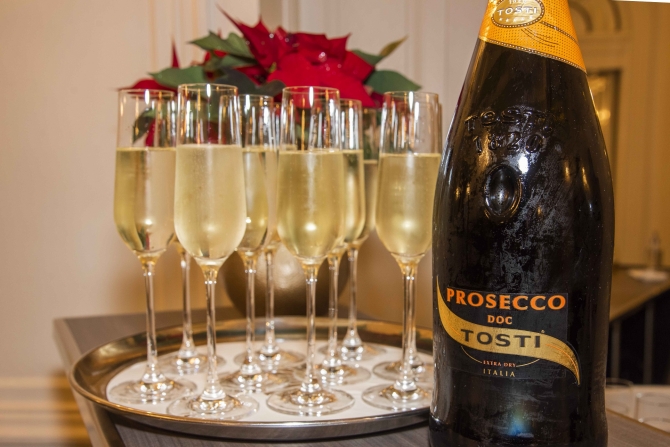 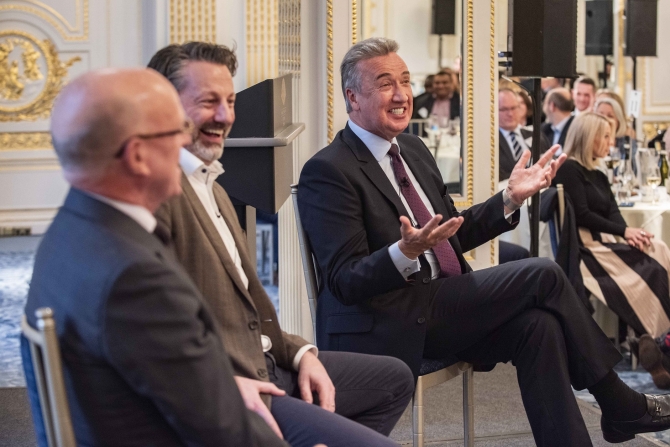 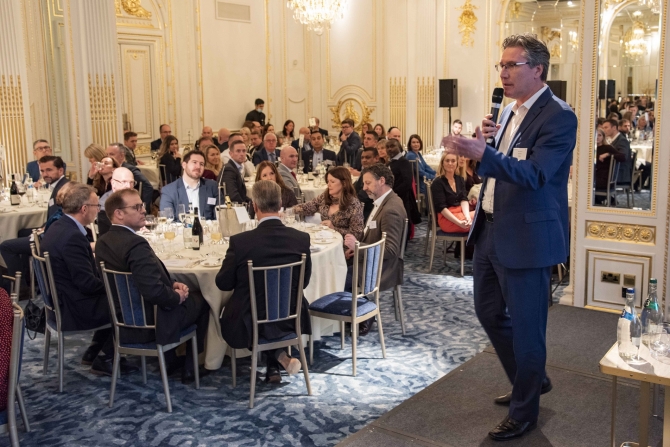 The Arena Christmas Event returned to the Mandarin Oriental Hyde Park hotel on Monday, where over 150 industry colleagues gathered amongst the glistening festive lights at this central Knightsbridge location.

Drawn in by a panel from CH&CO comprising Tim Jones, Chairman, Bill Toner, CEO and Allister Richards, Chief Operating Officer, guests were welcomed with prosecco from Unity Wines and canapés by Délifrance.

In true Christmas style, the main event began with food – a three-course lunch of butternut and caramelised onion tart followed by a rump of lamb and topped off with a chocolate fondant with pistachio ice cream for dessert. A table raffle to win an overnight stay at the Celtic Manor Resort also raised an impressive £1450 for industry charities Springboard and Hospitality Action.

After lunch, with everyone full and ready to hear a snapshot of CH&CO’s 30-year history during the company’s anniversary year, Lorraine Wood, Director of Arena, introduced Jane Renton, Executive Editor of H2O Publishing, as host of the panel discussion to welcome the team to the stage.

Listening to the panel, guests heard how Tim Jones’s late wife, Robyn Jones, had founded CH&CO (then Charlton House) in 1991. With Robyn’s experience as a school chef and Tim’s full-time job as a chartered accountant, the pair used a redundancy pay-out of £5,000 to buy a car and a computer and set up the business at a wallpaper pasting table in their spare room in lieu of being able to afford a desk.

The pair soon landed a catering contract at Brooklands Museum, Weybridge, after a neighbour had suggested Robin and Tim could improve the food at the establishment where he kept his old car collection. This move led to another big break when team members from Sony Europe, who used the museum for meetings and desk space, fed back that they wanted food as good in their own place of work - and soon, Charlton House was awarded the Sony workplace catering contract too.

In the years that followed, the company also earned a Royal Warrant for catering services to HM The Queen, which Tim claims is “great for the team, for example working the garden parties at the Palace” and of course, this really raised the company profile.

It was just over six years ago in 2015, when Bill, who was then CEO of Host Catermasters (HCM) and Madeleine Musselwhite, then HCM’s company finance director, met with Tim and Robyn to propose a merger. Between the two companies their joint revenue would be in the region of £180M; which “was an enabler to achieve more in an industry where it was becoming harder to do business as a niche player” Bill told.

Prior to this group meeting, Bill had worked his way to his position having begun his career aged 16 working at The Bridge Castle Hotel in Stirlingshire, Scotland. From there he worked his way through many a role in hospitality from chef to restaurateur, to working for Aramark as their youngest ever CEO, after seeking a role which he claims was better suited to working alongside family life.

It was then in 2019, when CH&CO acquired Gather & Gather from Mitie, that Allister joined the team as COO, having “really developed something special”, exclaimed Jane, “as the MD behind the Mitie catering arm.”

Unbeknown back then, the timing saw the team accelerated from discussing a potential labour shortage as a result of Brexit, to navigating a pandemic in which the company revenue fell to just 20% of the £550million they were turning over in 2019. “Nowadays companies need smart solutions to increasingly complicated problems,”’ tells Allister, “And the road to recovery will be longer than most people anticipated.”

What came out as key to CH&CO’s successful regrowth story so far, is “loyalty and collective enthusiasm from the team and a real desire to rebuild the business.” Allister told guests of how the CH&CO leadership team had made a conscious decision to be upfront and honest and “not let people join the dots themselves” during the hardest times the company faced.

New initiatives to support colleagues included ‘Wellbeing Wednesdays’, with Bill stating, “It is important not to just move on now and think ‘that’s done’ and assume everything has returned to normal. People’s struggles don’t go in a straight line and we must continue to support them.”

When asked whether they thought Government had done enough to support hospitality and understand its complexities throughout the pandemic, there was a sense that despite an industry effort in lobbying, the stop-start nature of the lockdowns had put huge strain on businesses, helped only by the furlough scheme which had been a “huge life-line”.

Describing their regrowth plan, Allister said, “In the midst of so much uncertainty, we developed a [three year] plan which will continually change, but which focuses on a turnaround to rebuild the business through growth opportunities and investment in our five pillars which include technology, people and ESG among two others.

Bill then spoke about how necessary it is for companies to be diverse in order to maintain cash flow and claimed that the resurgence of workplace catering had been the hardest segment for CH&CO to predict, since employees are now insistent on having a better home-office balance and so attend office locations less than they used to. Bill explained, “The growth opportunity here is growth per transaction at a consumer level. Can we get people to trade up and spend what they might have done in five days in three now?”

Meanwhile outdoor business is returning, however opportunities driven by tourism are still almost non-existent and events remain quite volatile, according to CH&CO. The school sector has also not returned to 100% due to regular illness leading to school closures, however CH&CO claimed they do still see schools as a stable future investment.

We all know about the labour shortage within hospitality and whilst discussing the new, lower capacities that the company is working at verses 2019, Bill did admit candidly that if all businesses requiring food service resumed to 100% capacity overnight,  “the whole sector, including CH&CO,  would be challenged trying to service this level of demand.” When compared to retail business, Bill identified that hospitality ‘can’t sacrifice a shift or close down shops’ when labour is short – hospitality needs people to deliver a service. “People had to find new jobs to feed their families during the pandemic and now it’s our job to encourage people back into our industry.”

However, in a nod towards the future and finding a solution to the labour shortage and utilising technology, Jane exclaimed how she wasn’t quite ready for robots to serve her dinner, and CH&CO admitted that this wasn’t in their sphere of thought either. With the team confirming that the use of technology is key for future development and that its use for pre-ordering and making payments is now a hygiene factor though, perhaps we should watch this space! But don’t worry, these were my words, not theirs.

After a fascinating panel conversation and Q&A, and with some questions left unanswered for next time, it was time to close the day and provide time for guests to network with colleagues past and present. It was by this time 4pm and it was only Monday after all!

Have a fantastic Christmas and a Happy New Year everyone. Look out for more events in 2022.

For more information on Arena Futures and how it can support new talent within your business, please visit the Arena Futures LinkedIn page here